Chris and Thomas: Land of the Sea 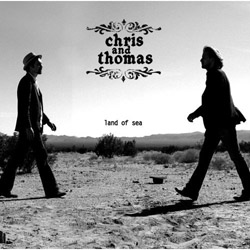 After a successful album release in the UK last year, Chris and Thomas are ready to take the U.S. by storm. Their debut, Land of the Sea, was recorded in a small Hollywood studio with well-known producer Mark Howard (Bob Dylan, U2).

The acoustic guitar is mesmerizing, and it’s clear they received inspiration from legends like Dylan and Johnny Cash. There’s also an element of their music that’s rooted in the origin of slave songs, which sparked the Delta blues of the Deep South.

Rarely can I say that I’m able to listen to an entire album over and over again. But with Land of the Sea, it’s true.