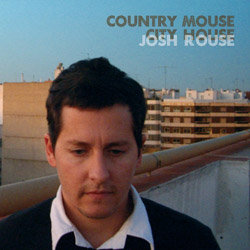 For a musician who split America for Spain a few years back, you might think his records would be growing exponentially and creatively. Unfortunately, for Josh Rouse, he seems to be backpedaling.

Somewhere around 2005’s Nashville, an utterly flawless collection of smooth sounding ’70s AM rock, Rouse mellowed out, quit the sauce and got divorced. Subtitulo was a nice, mellow offering in 2006, but his latest, Country Mouse City House might be his weakest effort to date.

“Sweetie,” the first country jangle, reaches for the girl and grabs her. It’s a beautiful Rouse riff, as is “London Bridges,” where he simply declares that he believes in love. Other tunes just come off as stale and content, as if Rouse has reached a nice point of domestic dreariness that none of us want to hear him sing about.

Missing are the drunken floor-naps of songs like “Rise” from 1972. Still, Rouse is as diligent and productive a songwriter as there is, so fans should continue to hope for a better 2008 offering.