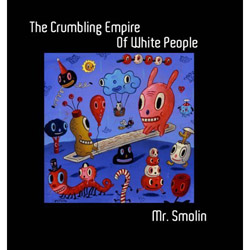 Living in the underground L.A. art-pop scene is a provocative singer-songwriter who calls himself Mr. Smolin. For those past and present students of his English class, you know him as Barry. Locals know him for his show on KPFK 90.7 FM.

Smolin’s sophomore album, much like his first with pop composer/dramatist Stew (the creative force behind the L.A. pop band the Negro Problem and Passing Strange), is exactly what you’d expect from a psychedelic radio show host and wordsmith – a lyrically-led journey through several genres of music, creating the bizarre world that is Barry Smolin’s.

The Crumbling Empire of White People is reminiscent of something of early They Might be Giants, but on a more exploratory level. Adding depth to the album is the poetry in Smolin’s witty and, at times, cynical lyrics.

According to his MySpace profile, there are 12 musicians credited to playing on this CD, adding the synth harpsichord and organ among traditional instruments, and throwing any chance of song monotony out the door.

The Crumbling Empire of White People is currently available.