Healing The World One Kiss At A Time: Combing Hollywood and Fashion for a Worthy Cause 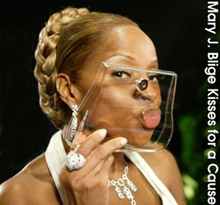 Just like that one special kiss you never forget, the kisses and signatures from today’s biggest names in film, television and music are being forever preserved in an effort to raise funds and awareness for an exceptionally innovative, charitable organization with big plans in effect.

For many years, Beverly Hills designer and humanitarian, Mario Magro had a dream to combine his desire for making the world a better place with the involvement of celebrities and fashion, in the most intimate of ways – a kiss!

As Hollywood began to fall in love with Magro’s unique fashion statement, the Le Coop handbag, a stunning purse that features two removable/interchangeable crystal and glass faces, an idea was born. Inspired by the positive reception, Magro developed the entire Le Coop Kiss concept, where celebrities would kiss and sign both faces of an original handbag, creating one-of-a-kind “works of art” to be immortalized forever just like handprints on the Hollywood Walk of Fame.

In 2006, Mario Magro’s Kiss For A Cause Foundation (MMKFACF), a non-profit organization was launched to move forward his message of peace and hope, garner the involvement of the entertainment industry and general public, and increase awareness of and raise funds for charitable causes. MMKFACF’s mission is not only to house, feed and educate orphaned and abandoned children but to go a step further and provide work and training skills to build a better life.

The Foundation’s main focus is to aid in the long-term future of children all around the world. Without such assistance, statistically, 95 percent of males get involved in gangs and end up in prison, while most females turn to prostitution and abusive situations (“Forgotten Children,” CTV.ca).

One way celebrities are becoming involved is by participating in online auctions. At this year’s Academy of Country Music Awards, some of country’s hottest stars, including Martina McBride, Rascal Flatts, the Wreckers and Vince Gill took time out of their big night to kiss and sign special edition Crystal Le Coop handbags. Both pieces from each handbag were auctioned online.

In another auction, one lucky bidder won dinner and a kiss on the cheek from the supermodel of their choice, Traci Bingham or Joanna Krupa, as well as a kissed collectible.

The dinner auction for Grammy nominated singer-songwriter Terry Steele is about to begin. The highest bidder scores concert tickets and the handwritten, signed score to Luther Vandross’s hit “Here and Now.”

This is just the beginning of the interest Magro intends to bring to his important foundation. Perhaps the most remarkable auction to date begins on Aug. 29 and runs through Sept. 11.

In remembrance of the 3,213 victims of 9/11, MMKFACF is auctioning off a limited series of multidimensional cast bronze art pieces entitled New York Stock Exchange 1901-1942. Magro hand carved the original design out of wood and made the bronze pieces using the original as the master. Twenty-five percent of the net proceeds raised from the first piece sold will be distributed to funds dedicated to the orphans of the 9/11 victims.

Over the years, Magro has been avidly engaged in causes that encourage and support the efforts of world peace and human rights, such as traveling to Herzegovina immediately following the Bosnia War. In an immediate post-war environment, he has seen the devastation and helplessness people face in such destruction.

Magro has made it his mission to protect the rights of women and children in distressing circumstances, while supporting diplomatic resolution to world conflicts. In 1989, Magro achieved international media recognition for his impressive hand carved wood sculptures of former U.S. president Ronald Regan and Soviet leader Mikhail Gorbachev, in honor of signing the nuclear peace treaty.

In 2000, Magro’s other project of peace was a stunning sculpture of the Vision of St. John, with a hidden compartment that opens to reveal a time capsule filled with messages of hope and peace to be revealed in the year 2150. Over 10,000 hours of blood, sweat, and tears poured into this masterpiece.

MMKFACF is also making it possible for ordinary folks to make a difference – and history – by seeking Kiss For A Cause Crusaders of Love to join the One Million Kiss Campaign. The goal is to collect one million kisses and record each, along with its accompanying message, in a volume of books bearing witness to those who walk the red carpet of humanity.