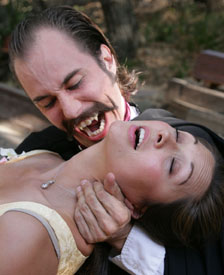 In the cold of the night, Theatricum Botanicum can be a scary place. The trees drape over the stage and strategically placed lights seem to create more opportunity for shadow than illumination.

What better place, then, to portray one of the oldest and most famous gothic horror stories – “Dracula.”

The setting is flawless. The acting is superb. The narrated voice over is handled exceptionally well, creating the feeling you’re inside the minds of the frantic characters as they wind their way through the darkness of the insatiable hunger and sensuality that is Dracula.

There are only minor setbacks, really, but setbacks that could turn the play from a curiosity into something better left unexplored. For instance, the play is a solid three hours long, with a 15-minute intermission. That’s three hours outside in desert terrain that gets chilly as the evening wears on, and if you forgot a pillow or other sort of seat softener, you’re in for a long night.

There are moments when the play tries too hard to be artistic. That seems like a strange statement, but the actors are up there doing a fine job with parts that are necessarily overacted and strenuous, and then it goes the extra (and completely unnecessary) mile and makes them sing their lines.

These were definitely actors on the stage, rather than musicians. Their voices, fighting hard through the first half of the play, gave out by the second, which was a shame mostly because it added nothing to the play. The “songs” had no rhyme or meter, nor anything that would suggest musicality besides the fact that they were sung.

And I’m sure this wasn’t anybody’s fault, but can I help it if every skinny pale guy with an eastern European accent makes me think of Sacha Baron Cohen?

Overall, this is a fine play that is worth going the extra mile to see as long as you know what you’re in for.