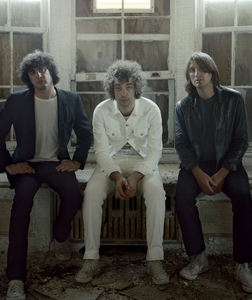 On stage, he’s a charming and energetic performer, a consummate artist with an easy flair and smoothness with his guitar, easing audiences into grooving and dancing to his effervescent tones. His debonair joie-de-vivre enraptures fans and captivates listeners with his soft and joyous tones.

Backstage, he’s a hardworking professional with a storied background and family dynasty, decades in music from his pop-alternative rock band, which put his name on the map, to his namesake’s pop-rock roots. Both personas belong to a superbly talented man named Albert Hammond, Jr.

Recognizing his trademark hair, staunch fans of the band the Strokes remember Hammond instantly and show up to support his musical solo endeavor with enthusiasm. At a recent show at the House of Blues Sunset Strip, people arrived hours before to fight for their spot in front.

Whisked away to somewheres-ville for the one hour, 20 minute set, they chanted and sung along to Hammond’s cheerful tunes from his pop-rock solo project. It can be said that his solo effort was created almost out of serendipity, with complicated touring schedules and difficulty arranging time with various key players.

When asked why his solo effort did not emerge sooner, Hammond replies, “I didn’t have any songs or the right people.” He finally completed his first album in December 2006.

His father, Albert Hammond, Sr., a famous songwriter in his own right, had a strong influence on his upbringing and artistry. “Dad made me a good human being with discipline and hard work,” he says.

This powerful foundation – aided in Hammond’s strength from the Strokes’ success to date – can be found within the sharply crafted tracks on Yours to Keep. Hammond’s strong sense of discipline and depth of talent makes him one of the strongest and most well grounded artists in today’s field of entertainers.

At his shows, his casual rapport with the audience is unmistakable, coloring the performance with a likable, approachable flair that most musicians fail to exhibit. Coupled with Hammond’s tracks which, some say, have an air of English pop influence, one can easily surmise the decades of musical influence permeating Hammond’s soul.

“I find it amazing how everywhere I go, people really like it,” Hammond quips while the crackle and craziness of a backstage frenzy can be heard in the background.

Almost everything Hammond has done to date has been done in pieces, while on tour. Interviews, writing and recording, all managed either during a tour or in between tours, can be tough on many musicians and performers in general.

Nevertheless, the influence from his peers in his regular band as well as his family serve as a bedrock of strength for Hammond who, in conversation, is very casual and unfazed by what most would consider a harrowing adventure, to say the least.

It’s good to remember that there are still artists out there like Albert Hammond, Jr., who not only craft music the way music was originally built, but craft it because it’s what they do and what they know, not assembled for the purpose of pop stardom. Hammond, some may say, is one of our youngest true artists, who will delight us with his prowess for decades to come.

Yours to Keep is currently available. For more information, visit www.myspace.com/alberthammondjr.