Rob Zombie: Brings Halloween Back from the Dead 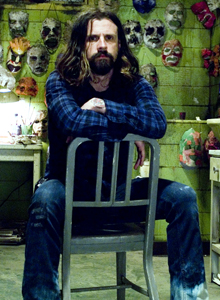 Rob Zombie is a prolific talent: a visionary musician, comic book creator, music video director and of late, cinema auteur. Zombie is fast establishing himself as one of the true Masters of Horror.

In addition to directing music videos for himself and his headbanging band, White Zombie, he has also directed videos for other artists, most recently Ozzy Osborne.

Zombie made his feature film directorial debut in 2003 with House of 1000 Corpses. In addition to showcasing Zombie’s violent but visionary style of horror, Corpses also provided a starring role for his wife, Sheri Moon Zombie, who played the psychotically sexy character Baby Firefly.

In Zombie’s follow up film, The Devil’s Rejects (2005) Sheri reprised her role as Baby, and the story of the murderous Firefly family continued.

Now the Zombie duo lend their creative talents and Rob’s singular vision to the retelling of one of cinema’s most iconic of scream legends: relentless masked killer Michael Myers, in the new Halloween movie.

This film pays tribute to the original 1978 classic, but it’s much more than a remake. It’s a re-imagining and delves deeper into the origin of Myers’ psychosis, starting with his disturbing childhood.

“I was excited about directing Halloween, but also burnt out on Michael Myers from all the old Halloween movies; so I decided to give him a full backstory,” says Zombie.

In person, Rob Zombie is quite unassuming. Aside from the long hair, scruffy beard and elaborate arm tattoos, he actually comes across as a soft-spoken ambassador of film. Zombie enjoys watching “The King of Queens” and the NHL’s Chicago Blackhawks on TV.

And surprisingly, the director says he doesn’t miss his days making heavy metal music. “White Zombie was a mess,” he shares.

Very articulate, and obviously intelligent, Zombie is a living testament to the fact that one should not judge a book by its cover. He conducted extensive research, not only into the legacy of the Halloween franchise, but also into the dark world of serial killers.

“I have been fascinated by the dark side ever since I first saw my mother reading Helter Skelter when I was 5-years-old. I really wanted to take this kid and transform him into the adult Michael Myers,” Zombie says.

In addition to directing Halloween, Zombie is also the screenwriter. Although the studio gave him free reign to make this film however he saw fit, he wanted to honor the classic film originally scripted by John Carpenter.

“That is the trick,” he says, “to balance from the old to the new. My decision was to keep to the original as much as possible but make it fresh. I am a fan [of the original].”

Sheri Moon teams with her husband once again, this time to play Michael’s mother, Deborah Myers.

“I love working with Sheri,” says Zombie. “Obviously, first of all she’s my wife. And I always wanted her to play Michael’s mom. Right away Sheri and Daeg [newcomer Daeg Faerch, young Michael Myers] had a great relationship and a great vibe.

“It became much more about Michael and his mom in the early scenes. It’s never really said, but you get the feeling at the beginning of the movie that Michael kills to protect his mom.”

“Really?” quips Rob. “I hadn’t noticed. But she’s a fine dancer, and it would be a shame to let all that talent go to waste.”