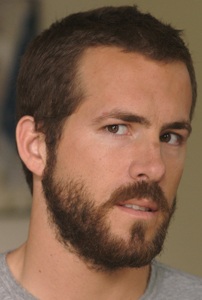 Not long ago, screenwriter Charlie Kaufman had a lock on offbeat and strange productions that lulled viewers into a delirious sense of confusion and whimsy. Many were convinced that this man was the be-all, end-all in that genre.

However, there’s a new sheriff in town: John August. This prolific screenwriter has taken surrealism and amped it to high-heaven with such crowd pleasers as Go, Big Fish and Charlie and the Chocolate Factory.

Now, August takes a turn as director in a film that he penned called, The Nines. This project is neither for the shallow, nor those afflicted with attention deficit disorder. It’s solidifying itself as “the think-piece of 2007.” Ryan Reynolds (Just Friends) stars as not one, but three characters within the feature – one of whom is even based on the director himself.

“Each story demanded its own approach,” admits August. This is why The Nines is structured as a trilogy of sorts.

The first part is the tale of an actor named Gary (Reynolds) who goes into a downward spiral of bad behavior that lands him under house arrest. As if that weren’t bad enough, he’s now forced into being baby-sat by an uppity publicist played by Melissa McCarthy (“Gilmore Girls”).

The two develop a friendly relationship. Unfortunately, he soon comes to the realization that there’s more to his chaperone than meets the eye. “He walks that line between vacuous and emotional,” says Reynolds about playing Gary the actor. “And there are a lot of actors out there like that.”

The second installation is set up to resemble a reality show. As Gavin, Reynolds stretches his acting chops to play August.

Reynolds was extremely concerned with highlighting his boss in the best possible light, while still staying true to his character and the script. “The biggest thing for me,” says the actor, “was being careful about part two.”

Then, there’s the third installation. This one takes the questions asked in the first two stories and scrambles them up into a total mystery similar to that of any David Lynch film.

But that’s what hooked the stars of The Nines on the screenplay in the first place. McCarthy and August, who have been friends for years, jumped at the chance to work together once again.

“When it came time to start writing this I knew I wanted her to be in it,” says August. Lo and behold, McCarthy became the muse for the film and was given the opportunity to step into three separate characters of her own.

“First, I had to calm down from the initial thing of making each of them different,” she says, giggling.

As a former member of the Groundlings improv comedy troupe, McCarthy is no slouch when it comes to characterizations. In the end, she kept each one of her onscreen personae closely rooted in reality.

The director also took to his leading man. When it came time to cast an actor who could rise to the occasion and be three very different and unique people, Reynolds was a no-brainer.

“We just made direct offers to people we wanted in the movie,” says August. Reynolds remains very modest about his success – not only in The Nines, but in life. From his humble beginnings as Billy on Nickelodeon’s “Fifteen,” this Canadian actor has morphed into one of the most sought-after comedic and action stars appearing in films today.

Luckily for fans, Reynolds also hasn’t “gone Hollywood.” He admits to disliking the pomp and circumstance of swag-fests like the Sundance film festival (referring to it as “the free shoes for the rich program”).

“I don’t like it because it’s sensory overload,” says the 30 year old. His heart, instead, lies with conventions like San Diego’s Comic-Con.

And Reynolds is much too dedicated to his craft for that.