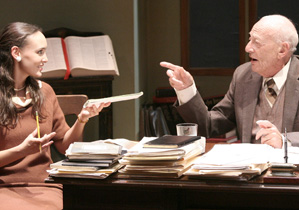 Playwright Joanna McClelland Glass provides audiences a brief glimpse into the last days of the life of Judge Francis Biddle in “Trying.” The play is a semi-autobiographical portrait of the author’s early days as a young secretary working for a cantankerous old man, and the eventual friendship she formed with him.

Sarah Shore (Rebecca Mozo, Zerophilia) arrives at Biddle’s office early on a summer morning in 1967. At the time he was 81 and a difficult and demanding boss for the young Canadian.

The Biddle name, recently tarnished by Sydney Biddle Barrows, the Mayflower Madam, had a long, proud lineage. Judge Francis Biddle graduated from Harvard with honors, and served as a clerk for Chief Justice Oliver Wendell Holmes. “Trying” is a success because of talent of his actors. Alan Mandell (Hedwig and the Angry Inch) is brilliant in the meaty role of the judge. He rails against his inevitable death with humor and pathos. Mozo, a Wynona Ryder look-a-like, is up against a master, and even though she’s more talented than her doppelgänger, Mandell is a tour-de-force.

The play is not a tearjerker by any means; there’s little sentimentality. It’s a matter-of-fact portrayal of two intersecting lives, a young woman literally burgeoning with new life and the elderly man near the end of his long career.

The only disappointing aspect of the play is that it doesn’t go far enough. There are a few moments when it seems to get at some real emotions, and then it backs away. Tighter direction from Cameron Watson could have propelled the play into absolute brilliance.