Pacific Division: Show You What's in Their Discman 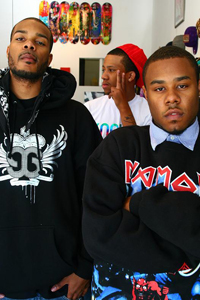 “A Flock of Seagulls and Phil Collins? Really?” I ask Mibbs, Be Young and Like over the speakerphone, incredulously questioning some of their greatest influences.

These three make up your favorite new hip-hop trio, Pacific Division. Barely pushing their 20s, these guys are weathered beyond their years, listening to jazz and classic groups such as Earth, Wind and Fire. They invoke the golden age of hip-hop without even trying.

With their diverse musical influences that greatly exceed their Palmdale roots, they hope to take key elements from all musical inclinations to create a revival for the future.

Like every one of us who grasps at the hope of making a living doing something we actually enjoy – the rare possibility of not being that guy watching the clock in his cubicle – these three are no exception.

Waking up early every morning only to drag themselves to work at an insurance firm from 9 a.m. to 6 p.m., you would never guess they first bonded over Ghostface Killah and spending their paychecks on fresh new sneakers.

Bringing new meaning to the word hustler, they make their living on the up-and-up, multitasking from their desks as they e-mail beats and messages to each other until it’s time to leave and they can practice in the studio.

While brothers Like and Mibbs met right after the womb, Be Young was introduced to the two on the Highland High basketball team. While they might have balled together, the two brothers had no idea their teammate Be Young was interested in hip-hop, and definitely had no clue he liked to rap.

Trading discmans only to discover they all loved Ghostface and Wu-Tang, their first session proved enormous energy, but not so much talent. Be Young didn’t excel at rapping at first, but through their own self-admitted acceptance of constructive criticism, they tore each other apart only to rebuild even stronger.

“We don’t want to run for president or anything, we just want our parents to be proud of us,” they state honestly and modestly. While the music is not just a way to make money, they’re still out to “get that bread” and hopefully one day, it will grow from their musical talents.

I had the privilege of watching these guys play a small show in the unlikely setting of upper class Pasadena and was immediately convinced not only that they were my new favorite hip-hop group, but I also wanted them to be my best friends.

So full of energy and genuine excitement about music, open hearts and collaborative minds, Pacific Division is nothing but themselves.

“We’re not backpack rappers, we’re us, talking about real lives; women, shoes and clothes,” they explain. With minimal cussing or capitalization on “rapping” stereotypes, their first street album utilizes many golden era samples and demonstrates their great affinity for experimentation.

They’ve got a new album in the works with an expected drop date in the beginning of next year. With songs titled “Women Problems” and lyrics like “My girl problems go way before junior high/Nicki used to diss me was a prissy little cutie pie/Danielle rejected my fan mail/remember writing letters to Janette she would shred ’em when she get ’em,” their youthfulness is endearing and unassuming.

Mibbs, Be Young and Like have only the most genuine of intentions with the natural talent that will no doubt get them there.

“We want to make music we’re not ashamed of,” they state simply and with more eloquence than many of their rap elders. Their request is simple and free from pretense, void of power struggles and overall the most refreshing drink you will find in the stifling L.A. summer heat.

Over the beat of Pharcyde’s “Passing Me By” Pacific Division freestyle, “girls keep on passing us by, my ass broke but I’m still fly.”

Pacific Division will perform Sept. 4 at the Roxy in West Hollywood. For more information, visit www.myspace.com/pacificdivisionmusic.