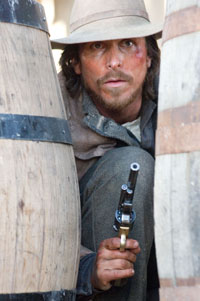 It’s been a while since a western worth seeing has hit the big screen.

Published in 1953 in Dime Western magazine, 3:10 to Yuma the short story was penned by none other than acclaimed novelist/screenwriter Elmore Leonard. Four years later it was brought to the big screen, which a then 17-year-old James Mangold (Walk the Line) saw for the first time.

True to Leonard’s form, the plot line to Yuma is plain and simple: a cash-strapped rancher/ex-Civil War soldier Dan Evans (Christian Bale) volunteers to join a posse that’s going to deliver the wily rustler Ben Wade (Russell Crowe) to the train line that will take him to be tried and on to prison.

“We didn’t do a whole lot of talking about it off screen,” Bale explains when asked about getting into his role. “I tend to feel that if it’s working, it’s working. [Russell and I] had very strong and firm ideas about who we were.”

Bale and Crowe have managed to keep their creative juices flowing over the years by playing a wide range of characters.

Russell explains what brought him back to the old West.

“It’s a good list ... you get to ride horses ... ride with guns, speak in a funny voice,” he says, poking fun at American accents. “You would approach something like this probably thinking ‘this is going to be a bit of fun.’ But then I realized, once I got there, that Santa Fe is actually seven and a half thousand feet above sea level, and it was going to be significantly colder. So, Peter Fonda actually decided [on] a scale ... one day he made a stand, he said that he couldn’t act on location, in period costume at below 13 degrees.” Bale piggybacks, explaining what drew him to 3:10.

“At that time, you had to be a much stronger-minded individual in order to survive. I find that appealing, to watch people who test their mettle everyday.”

That covered, one wonders what Bale’s thoughts might be on the possibility of being cast as the lead role in The Dark Knight.

“As far as that goes, as long as it doesn’t tread on the toes of what we’re doing, then it’s alright. But I think we’d better figure out what we’d start before we start shooting the third one,” says Bale matter-of-factly. “I don’t look at any difference between movies and any other job. Movies are not a business to me. I don’t think about where the financing is coming from. It’s just about the telling of the stories.”

Over the years, Crowe has managed to find those far-flung characters that seem to fit his persona. How does he pick his roles?

“It’s the same as it has always been. What’s the story? What’s the character? That’s my focus when I read a script,” the native New Zealander says. “I don’t think that I’ve become more selective over time. I think I came into it being selective. I just do things that appeal to me. And they’re not going to always be the sort of things that the head of a studio thinks will appeal.

“You get a lot of opportunities that come with a big paycheck that doesn’t necessarily appeal to you. I think you’ve just got to stay true to yourself in that way. When I read a script, if I get goose bumps then that’s the thing that I do.”