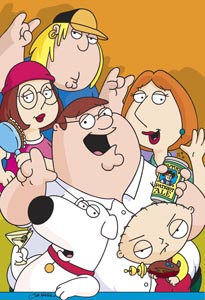 Seth MacFarlane is the man behind “Family Guy,” the half-hour comedy animation show featuring the Griffin family, who all live and work in Quahog, R.I., a fictional suburb of Providence.

He’s also the voice of Peter Griffin, Stewie Griffin, Glenn Quagmire and Brian, the intellectual, martini-drinking dog. For fans of “Family Guy,” that’s virtually every aorta of the beating heart of the show.

Cancelled after just a couple of seasons in 2002, high DVD sales and large viewing figures for the reruns on Cartoon Network’s Adult Swim convinced FOX to resume the show in 2005: it’s one of the few television shows to be cancelled and revived by the power of its fans, and it’s now starting its sixth season.

Racy certainly describes “Family Guy.” Much stronger words have also been applied, as its battles with the FCC (Federal Communications Commission) – famously parodied in song-and-dance in one episode – have proved.

“The people who get offended aren’t the ones you think,” the two-time Emmy winner says, “just the hardcore, right-wing Christian folks who are offended by everything. Every week we get letters saying ‘Jesus this, Jesus that’ and ‘You’re all going to hell.’ We don’t single anyone out. We always poke fun at everybody, because no one wants to be in a bad spot.”

MacFarlane happily admits that the humor of the show owes a lot to vaudeville, and there’s a lot of English humor too, like Monty Python. There are also some similarities to ’80s British sitcom “The Young Ones,” and a huge nod to the parody and spoofs associated with movies like Naked Gun and the TV series “Police Squad!”

MacFarlane, 33, was born in Kent, Conn. and studied animation at the Rhode Island School of Design, which inspired the hometown of the Griffins.

It was during his time at college that he created a short film entitled The Life of Larry, an early ancestor of “Family Guy.” After graduation he was hired by the legendary Hanna-Barbera Productions and later worked as an animator and writer for Cartoon Network’s “Cartoon Cartoons” series, which included “Johnny Bravo,” “Dexter’s Laboratory” and “Cow and Chicken.”

In 1996, MacFarlane created a sequel to The Life of Larry called Larry and Steve, which featured the bumbling middle-aged Larry and his highly intelligent dog, Steve. This new incarnation first hit the screen in 1999 during the Super Bowl commercial break, and it caught the attention and imagination of 20th Century Fox, who called him in and asked him to create a series based on the characters.

As with “The Simpsons,” “Family Guy” has had its share of movie, TV and music stars queuing up to be immortalized onscreen, even if it’s going to be high parody or in a very less-than-flattering way.

“A lot of people do call us up and say, ‘Hey, I love the show and I’m happy to do it.’ Drew Barrymore was one of those, and when we went to ask her to do a show, she ended up staying as a character for the whole season.”

What few fans may know about MacFarlane was that he was scheduled to fly from New York to Los Angeles on Sept. 11, 2001 on American Airlines Flight 11. He arrived 10 minutes after final boarding had ended and was told to wait. Fifteen minutes later that plane crashed into the North Tower of the Word Trade Center.

“The only reason it hasn’t really affected me as it maybe could have is I didn’t really know that I was in any danger until after it was over,” MacFarlane told TVShowsOnDVD.com.

As for the future, MacFarlane thinks that there will be more straight-to-DVD movies, such as Stewie Griffin: The Untold Story, and we may see the Griffin Family on the big screen as well, though MacFarlane himself might be branching out further.

“I periodically get offers for acting, but I dance around it with a kind of trepidation” he shares. “I’ll probably take a stab at it at some time.”

For now, MacFarlane feels very good about just going to work every day: “Sometimes we get all the things we hope for.”