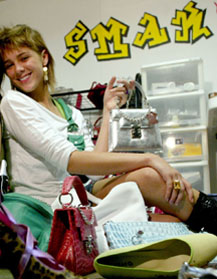 Last year, business pals Karrie Johnson, 35, and Tarah Smith, 24, put their heads together and came up with edgy handbags that shouted for attention and attitude.

Their creative musings paid off. In recent months, celebrities, including Brandy, Kim Cattrall and Nicole Richie, have swiped up their wares and been sighted toting them on runways and in magazines.

Johnson was dumbfounded, in fact, when singer Kelis approached her while browsing in an L.A. boutique. She wanted a SMAK original that incorporated brass knuckles and Indonesian python on a small clutch. For $200, the bag was hers.

While most of their customers hail from the West Coast, the two girlfriends, who met while working at talent agency (Johnson as a freelance photographer, Smith as a model), work endlessly from a St. Louis-area home that Johnson shares with her boyfriend and two sons.

In the basement office, the two women churn out statement-making metallic leather bags with funky straps, nickel (and even oxidized bullet) hardware and pouchy fronts.

The company of two began in 2003 when Johnson approached her model friend about a few suede pouch bags that she had made.

"I’ve always made things like belts, shirts and crochet dresses," says Johnson, dressed in a pink lingerie tank and white pants. "And I’ve always used Tarah as my model. I figured if she liked it, other people would, too."

Smith did. And after completing a modeling stint in Italy, she happily returned home to join in her friend’s efforts to sell the bags and to create others.

"I taught her how to sew," Johnson recalls, and practice made perfect.

At first, the women hand-stitched all orders themselves.

"But it got so crazy," Johnson says. "We’d have 50 bags to make. We’d tell people that orders would take four to six weeks and then work 12-hour days. We worked that way for four months."

In time, they found cost-friendly manufacturers in Brazil, where Johnson lived for five years, learned to speak fluent Portuguese and got to know a few local tanneries.

Yet, the two still make the pricier one-of-a-kind bags themselves. In fact, when the two came up with a large Indonesian python pleated bag with double stitching ($600), it rattled emotions.

"We cried when we made that one," Smith says, proudly showing off an image of their Web site, www.smakbags.com. "It was so beautiful."

The women peddle the bags themselves by attending trade markets and trekking across the country in planes, trains and automobiles to boutiques near and far.

"We had no guidance. We just did it fearlessly," Smith says of their cross-country and sometimes transcontinental exploits. A recent search for artisans led the two on a wild night’s drive near the Amazon.

Fred Segal in Los Angeles carries their bags along with a half dozen other L.A.-based shops.

Names for footwear, which was added to the collection this spring, range from the leopard-print pony hair Hold On There Tiger stiletto ($158) with metallic pink heels and wraparound straps to a retro red suede Stalker boot ($165).