The Hunting Party: (The Weinstein Company) 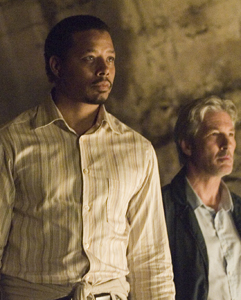 In the summer of 2000, Esquire magazine published a classic, if somewhat bizarre, piece of war reportage: Scott Anderson’s “What I Did on My Summer Vacation.” It told the tale of Anderson and four other reporters who, having covered the Balkan War, return to Sarajevo for the five-year anniversary of peace.

Reconnecting over drinks, they decide to capture the war criminal Radovan Karadicz, the most wanted man in Europe, widely believed to be protected by loyalists in the mountainous Serbian territory close to the Montenegro border. Enlisting the help of disaffected local police and dubious spies, all the while encouraging the misconception by relieved locals that they are in fact the long-awaited CIA hit squad, the journalists embark on a journey so dangerous as to be absurd.

Richard Shepard’s film fictionalization, The Hunting Party, opens with a disclaimer: “Only the most ridiculous parts of this story are true.”

Though Richard Gere, Terrence Howard and a wonderful Jesse Eisenberg (The Squid and the Whale) compose a great hero triad, much of the dialogue sounds forced, artifice in an attempt to make these guys sound cool. The scenes are awkward, evoking an image of the screenwriter-at-desk-in-struggle-with-structure rather than allowing you to get lost in the oh so juicy tale.

Part of the problem is that it’s not clear why Gere’s character, Simon – a world-weary war reporter who loses his career after having a live “meltdown” – is thrown out of the news media’s good graces. A momentary loss of temper doesn’t seem like enough; it just feels like a convenient, and much-needed, plot point.

Similarly, a big part of the premise is that Simon reels back into the life of former cameraman Duck (Howard), but Gere’s off-screen time is short enough to render the point moot. No amount of Duck’s voice-over narration – upon which the film heavily relies – can change that.

Despite its problems, however, the film is packed with an entertaining – and, it turns out, not entirely fictional – ensemble of characters, from a mobster midget and a donut-loving UN imbecile to an axe-toting, death-punk Serb nightmare. The reason why The Hunting Party works is that its awkwardness matches that of the world it seeks to critique.

The tongue-in-cheek disclaimer draws attention to what might otherwise be dismissed: what should be a responsible, international community that seeks to capture war criminals rather than work with them in “negotiations” does not exist. Our notions of such are no more than fallacy, a figment of our naive collective imagination. What Shepard does right is to point out that this, in the end, is ridiculous.