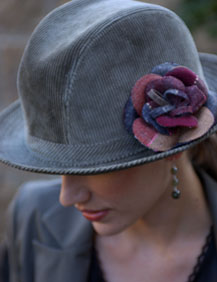 Tweed – that sturdy fabric often associated with horsy highbrows and stuffy literary types – translates into nearly every facet of women’s fashion this fall.

You’ll find it in all its traditional glory in suits, coats and handbags. But tweed also turns up unexpectedly in shoes, boots, belts, pins and hair accessories. Nike, the athletic apparel titan, is expected to launch a tweed trainer soon.

What’s behind the trend? "It has the ability to work as a seasonless fabric now," says Tom Julian, trend analyst for Fallon Worldwide advertising agency and style commentator for Oscar.com. "There are the silk tweeds, soft and feminine tweeds versus the classic, country-style tweeds of the past."

It’s a nod to menswear that fits well with the resurgence of tailored clothing, he says. "Tweed also has the luxe/deluxe feeling, which is indicative of the season. Old world, new style."

What exactly makes a tweed a tweed?

Traditionally, tweed is a hand-woven medium- to heavy-weight wool fabric with a rough texture. It comes in weaves such as herringbone, chevrons, checks and plaids. These days, most commercial tweeds are machine-woven, and the wool is often blended with cotton, silk, rayon and other fibers. For spring and summer tweeds, no wool is used.

Why is the fabric called tweed?

Believe it or not, it comes from a clerical error. According to the Encyclopedia Britannica: "The word tweed was not derived from the River Tweed, although the cloth was manufactured in the Tweed Valley. Tweed is usually made by a variation of the basic twill weave, and the old Scottish name for twill was tweel. The name tweed is attributed to a mistake on the part of a London clerk who in 1826, when drafting an order or invoice for tweels, accidentally wrote tweeds."

What’s the difference between a Donegal tweed and a Harris tweed?

A tweed is often named for the region or town – usually in Scotland, Ireland, Great Britain – where it’s manufactured. The real-deal tweeds will carry a special label that authenticates their origin.

HOW TO WEAR IT

The fabric seems so masculine. How do I avoid looking like a man?

Make it more feminine with a soft fabric: a silk blouse, a cashmere sweater set or a suede skirt. Other softeners: Ribbon ties and trims; unfinished hems and a loose weave such as boucle. Delicate jewelry also helps.

Will tweed make me look heavier?

It can. "Don’t do tweed on tweed on tweed," says Tom Julian, trend analyst and style commentator. Fuller figures should look for jackets, pants, skirts and outerwear in lightweight salt-and-pepper or herringbone tweeds instead of heavy wools in checks and plaids. Save the oversized prints for accessories.

I like to look current but I’m so not a fan of tweed. What should I do?

Wear it in an accessory such as a belt, pin or a hair clasp.

Am I limited to browns, grays, blacks and greens?

No, you’re not. Look for the fabric in hues of pink, purple, blue and yellow.

Can you mix your tweeds, say, a herringbone with a houndstooth?

Most tweeds don’t mix well. The herringbone-and-houndstooth combo is an example. They’re too textured and busy. One pairing that may work is mixing a plain or salt-and-pepper tweed with a more complicated print such as a chevron or diamond. "I think it is easier to mix tweeds with the unexpected — denim jeans, lingerie tops, satin fabrics," says Julian.

Tweeds and animal prints: yes or no?

"Definitely," says Julian, but limit it to "one tweed with one animal with one solid, please!"

Tweeds and florals: do or don’t?

A "do," but not for fall and winter. "I think (fall) is more the season to do tweeds and stripes or tweeds and paisley," says Julian. "The florals were stronger and appropriate for the spring 2004 season."