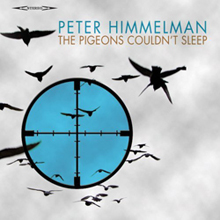 Himmelman’s mindset here is appropriately summarized in the album title. The longtime critic’s darling starts off the album with the title cut where the listener quickly realizes that “The Pigeons Couldn’t Sleep” has nothing to do with birds – it’s a hazy reflection of a man struggling to hold on to anything meaningful in a life seemingly shot to hell.

The theme recurs throughout The Pigeons Couldn’t Sleep and for good reason. Himmelman is going through a midlife crisis, something that is chronicled in-depth in Rock God, a bonus DVD included in this package.

The film portrays Himmelman in various states of despair – losing his job scoring the music for TV shows, playing on the road to virtually non-existent crowds and looking back at his younger days as a member of the Sussman Lawrence Band. Through it all Himmelman (mostly) keeps his cool and always keeps his wry sense of humor intact, and that’s probably the thing that has kept him from hanging it up as a recording artist.

Right now Himmelman is truly suffering for his art; that’s something that eventually will end. In the meantime his fans shouldn’t feel too guilty about enjoying what his misery has wrought: one of his finest efforts ever.