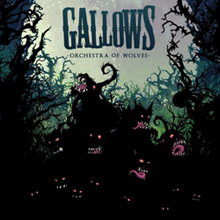 UK’s Gallows debut their sound in America with Orchestra of Wolves. “Last Fight for the Living Dead” is a haunting expedition leading into the destructive “Just Because You Sleep Next to Me Doesn’t Mean You Are Safe.” This song, one of the strongest, has odd rhythm and tempo changes that allow Gallows to stand out from other true punk bands.

“Will Someone Shoot That Fucking Snake” is powerfully crunched and incites bodily movement, perhaps even injury. “Sick of Feeling Sick” gets feet stomping and actually sounds like it could be a Buckcherry song.

“Black Heart Queen” is another favorite, and “Abandon Ship” may tug a few heartstrings. (Proof that punk can show more emotion than just angst.)

“In the Belly of a Shark” and “Rolling with the Punches” both have dirty grooves, and a bit of fancy fretwork. There’s even a raucous cover of Black Flag’s “Nervous Breakdown.” Gallows is the true punk band that invites in the mainstream rock listener while not pissing off the hardcore old school fans.

Orchestra of Wolves is currently available.