Black Rebel Motorcycle Club: Taking Them All On, On Their Own 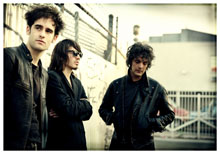 In fact, with song titles like, “Killing the Light,” “666 Conducer” and “Love Burns,” and some sartorially-appropriate black and white promo photos, Black Rebel Motorcycle Club has earned a reputation as a leather-clad, introverted, chain-smoking, brooding, dirty rocker seeming cliché of a band.

Reviews from critics have run the gamut, and the band’s newest album, Baby 81, has garnered mixed reviews, with some claiming the band is at its height of fulfillment, others declaring that it has hit its lowest of lows, and everyone convinced their opinion is best. But guess what: BRMC couldn’t care less.

“We can survive,” singer and guitarist Peter Hayes says. “Our only goal was, and is, to give something honest to people.”

For BRMC, it’s not about fitting into the limitations of a particular genre or pandering to the expectations of critics or fans. Howl, the band’s third release, was a stark departure from the kind of sound its listeners were taught to expect from the first two albums. For many, it indicated a new musical direction for BRMC; whether that direction was bad or good is up for debate. For the band, however, it wasn’t about making a statement; it was about letting the music evolve on its own.

“We had the opportunities to work with people that could have maybe made us more palatable, but we chose not to do that. We got into this to make a change, not to change into what we consider the very safe way of doing things,” Hayes says. “Howl was a risk, but that’s the point. As far as I’m concerned, it’s the expression of art. [Art is] supposed to be created to do what you want to do, and if you’re worried about other things too much, then you’re missing out on the best part of it: the experience.”

“Our idea was to have a band where all the crap you liked, and all the crap you didn’t like, came from us,” Hayes says, laughing. “It’s all on our shoulders. That’s just honest. And if it grows into something you hate, oh well, then so be it, we did that. If it grows into something you love, then so be it. But each album is honest; it’s coming from us, even the mistakes along the way. I’d be able to live with myself a little better knowing that’s what I did, that’s what we did as a band. Which means maybe you don’t sell as many albums, but that’s not really the point.”

What is the point, then? Merely that long hair, implementation of leather into everyday wear and penchants for aviator sunglasses – contrary to popular belief – do not a rock band make. To be a real artist, a musician has to be aware.

“I think it’s everybody’s right to question what’s going on [in the world]. For an artist, one of the major points is to give voice to those questions and the things they saw in society. I also think [that ability has] been kind of destroyed by capitalism. Art used to be what a culture respected, and in many cultures, the artwork is what’s left behind. Now, that doesn’t seem to be there, and I think that’s a shame.”

For Hayes, music is the way to bring back real art, untinctured by capitalism, and standing back in today’s politically volatile and morally questionable time isn’t an option.

“[Corruption] should be talked about, and it should be heard about in music and any kind of art. When it all goes away, I’d rather leave something behind that makes people know it wasn’t all horrible, that there were some people speaking out against it.”

Hayes believes there’s a lot of evolution left for Black Rebel Motorcycle Club, whose politically charged music, fearless voices and, yes, intimidating leather pants, pose a challenge to musicians everywhere. The band will keep pushing boundaries for as long as it can.

“We’ve got nothing but time to keep on going,” Hayes says, laughing. “Hopefully.”

Baby 81 is currently available. BRMC will perform Sept. 7 at the Greek Theatre in Los Angeles. For more information, visit www.blackrebelmotorcycleclub.com.