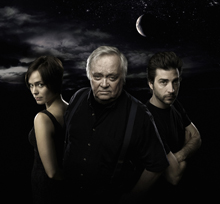 “The Dreamer Examines His Pillow” tells the story of Donna and Tommy, ex-lovers trying to resolve their feelings and issues with each other. Through their conversations, they learn to recognize the responsibility that love imposes on each of us.

This celebrity-stuffed play is written by the legendary John Patrick Shanley, who won an Oscar and Writers Guild Award for his screenplay for Moonstruck. In 2005, Shanley’s play “Doubt” was awarded the Pulitzer Prize for drama and the Drama Desk Award and Tony Award for Best Play.

The critically acclaimed and award-winning Anita Khanzadian directs. Some of her directorial efforts include Tennessee Williams’ “Outcry,” Arthur Miller’s “Death of a Salesman” and Thornton Wilder’s “Our Town.”

One of the most appealing aspects of “The Dreamer” is its cast – three veterans of the stage and screen: Amanda Tepe (Donna), Jeffrey Stubblefield (Tommy) and Eddie Jones (Dad). Tepe wrote, produced and appeared in “Tepe for Mayor: 3 One-Acts to Get Your Vote.” She also had a recurring role on “General Hospital” and can now be seen on the big screen in Rob Zombie’s Halloween. Stubblefield previously collaborated with Shanley, Khanzadian and Jones in “Beggars in the House of Plenty,” and appeared regularly on “The Practice” and “Desperate Housewives.” And Jones is an award-winning stage actor who boasts numerous film and television credits including TV’s “Lois & Clark” (Superman’s father) and A League of Their Own and The Grifters. McCadden Place Theatre is located at 1157 N. McCadden Place in Hollywood. Show times: Thurs-Sat, 8 p.m.; Sun, 2 p.m. Tickets: $15-$20. To purchase tickets, call (818) 765-8732 or visit www.plays411.com/dreamer.