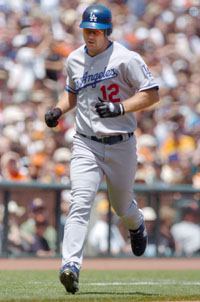 To the dismay of Toronto, Arizona, San Francisco and Anaheim, Shea Hillenbrand has not had such an impact on a series since his days with the Red Sox. Jeff Kent looked like he did in his 2000 MVP season with the Giants, as the Dodgers took on the Washington Nationals in a three-game series at Dodger Stadium on Aug. 27 through 29. Kent and Hillenbrand made sure the Dodgers kept their playoff chances alive as Los Angeles swept Washington.

Hillenbrand’s offensive outburst could not have come at a better time. His five RBIs came at the right time for the Dodgers in each game. Playing in the final two games of the series, Hillenbrand had a .444 batting average (4-for-9) with a home run and five RBIs. The home run, which came in the sixth inning of the third game, was his first as a Dodger.

The Dodgers improve to 70-63 after the series; the Nationals fell to 58-76. It was the Dodgers’ first series sweep since sweeping the San Francisco Giants right after the All-Star Break. Each win was by one run, with the winning run scored late in each game.

The Dodgers did not have an extra-base hit in the series opener; all 10 hits were singles (including four consecutive singles in the sixth inning). The Nationals, conversely, had all of their runs come off home runs. Dmitri Young, Wily Mo Pena and Ryan Zimmerman each hit home runs off of Lowe, who last gave up three home runs on Aug. 16, 2005, against the Atlanta Braves.

Hillenbrand’s two hits and two RBIs propelled the Dodgers to a 4-3 victory in the middle game, which included Kent’s 17th home run of the season. Dodger starter Chad Billingsley had a rough start, making 26 pitches in the first inning, hitting two batters and allowing a run.

However, he settled down over the next six innings, giving up only one more run before leaving in the seventh inning. He improved to 9-4 with the victory, and Saito struck out two as he pitched a perfect ninth inning for his 36th save.

In the series finale, the Nationals were unfazed by Dodger ace Brad Penny, as they jumped to a 4-0 lead before Russell Martin cut the lead in half during the bottom of the second, with a two-run home run to left field.

Yet, it was Hillenbrand and Kent that led the Dodger comeback. Trailing 8-3, the Dodgers scored five runs in the sixth inning to tie the game, which included a bases-clearing double by James Loney, followed by Hillenbrand’s game-tying, two-run home run.

The Dodgers completed their comeback in the 12th inning when Hillenbrand’s sacrifice fly to Austin Kearns allowed Kent, at third, to tag up and run for home. Kent’s headfirst dive into home plate beat Kearns’ throw, as the Dodgers rallied back for a 10-9 victory. Proctor (3-0) earned the win for the Dodgers.

With the sweep, the Dodgers remain in third place in the National League West, but within striking distance of the wild-card spot – only three games behind wild-card leader San Diego, and four games behind division leader Arizona (as of Aug. 30).

The Dodgers begin the final month of the season with 10-game road trip on Aug. 31, which takes them through San Diego, Chicago and San Francisco. The Dodgers hope to build on the sweep (and current four-game win streak), to continue making a playoff push

*Dodgers claimed two-time All-Star, right-handed pitcher Esteban Loaiza off waivers from the Oakland Athletics. Loaiza, 35, started two games for Oakland, giving up three runs in 14.2 innings and will start at Chicago on Sept. 4.

*Russell Martin stole his 21st base, the most of any Dodger catcher in a single season. Juan Pierre, a career .340 hitter against the Nationals, had his 15-game hitting streak end in the second game.

*The Dodgers are 21-7 when Brad Penny starts.

*Takashi Saito’s two saves in the series put him in 10th place in Dodger history with 60 saves. His 36 saves this season ties him for sixth (Todd Worrell) among Dodgers in a single season.

*The Dodgers have won seven of their last eight home games.