Warped Tour 2007: Currently with: My Backpack and Duffel Bag 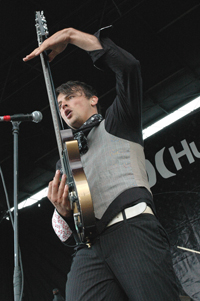 It’s the last day of tour. Finally. It’s actually over now. I’m back home in Los Angeles, and I’m surrounded by friends I haven’t seen in two months, and yet … for all my complaining, whining and general emo-ness, I don’t quite want to leave the dirty, disgusting, uncomfortable RV that’s been my home these last three weeks.

Today felt very much like the last day of senior year, trading contact info with people and reminiscing about the good times of the last two months all day long. No real work got done today, it was just our time to look back on what we’d all collectively been through together and pick up those last merch items from friends’ bands that we had been eyeing for the past however many weeks.

The show itself was as chaotic as Warped can possibly get, this being the last one – and in L.A. no less – with a slew of surprise acts to make things even more interesting. For whatever reason though, a secret Avenged Sevenfold set just didn’t get me stoked like I thought it would when I had old friends and new ones I’d rather give my time to.

Avenged was disappointing anyway and, dare I say, boring? I never thought it would be an applicable adjective for them, but they’re either way out of practice or everything just seemed more epic in 2005 for whatever reason.

I talked to Shawn Harris of the Matches a few days ago and he lovingly likened touring to living a gypsy lifestyle, something that rang even more true after we had fleshed out the analogy. We get up every day, paint our faces, put on song and dance, sell our wares, then pack everything up on our camels to travel to the next town and do it all over again.

Everyone should get the chance to pick his brain, it’s full of awkwardly quirky intellectual randomness, and I’ll surely miss his impeccably dressed geekery everyday.

Today alone was more exhausting than any other day of the tour so far because I and everyone else have been running around like headless chickens. But now that the dust has finally settled after two months, I wish I still had more time left.

Now I get to be legitimately alone with myself for the first time since I left, to compose my thoughts and regain a normal schedule of bodily functions. Add some new friends on MySpace, tend to my new tattoo, maybe check out a club show or two. I’ve missed taking photos with indoor lighting. I suppose it’s only a few months until Taste of Chaos starts up, but I want to be back on the road now [end whining].