Into the Wild: Hollywood Goes Back Country in Search of a Soul 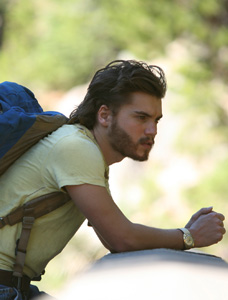 I chipped my tooth today. Pulling into the Home Depot parking lot, the car hit a bump as I lifted an oversize glass bottle of overpriced water to my lips, and like the ongoing joke that is my current life, my once smooth tooth was now grainy and jagged. I chipped my tooth; only moments after an e-mail informed me not only did my turning 23 negate my health insurance, but my vision and dental as well.

P.S. This was all following the return of my rental car to the wonderful people of Enterprise, as I learned that although I totaled my own car a mere week ago, that financial and emotional ruin would in fact not pay for the mystery crack in the windshield of the rental.

Mark Twain could not write stuff this twisted. Most often truth really is stranger than fiction.

The completely obscene lengths humans go to feel fulfilled, and the most twisted of situations we manage to get ourselves into, could never be duplicated in a film. While it’s no chipped tooth, Christopher McCandless’ epic tale of soul-searching and pushing nature to its limits was once captured in John Krakauer’s Into the Wild novel, a book entwining McCandless’ generation-defining attitude with tales of other eccentric greats including John Muir. Sean Penn, picking up where the pen left off, adapts the novel into a screenplay.

“Home is where the heart is,” “Wherever you go there you are” and a spattering of other idioms hoping to guide young lost souls into some sense of solace or semblance of finding themselves might sound cheesy, but strike at an overwhelming universal yearning. McCandless was 22-years-old when he hit his final revolt; leaving behind comfortable affluence and a life that would have led him down a path much like every other young and confused 20-something around him, he headed to the most primal and basic of environments he could find.

Entering the barren, desolate and virtually untouched by humans portion of the Alaskan wilderness with a minimal amount of supplies and direction, McCandless was looking for something. Whether it was the compulsion to take risks and the need for adrenaline, a sense of displacement in contemporary society and a need to fill a soulful void, or purely a brash act of revolt, McCandless’ experiences in the wild appeal across the board to our own insecurities and most human of instincts.

In the wake of every story lies a telltale line of movie producers waiting to snatch it up for the big screen. Into the Wild was no exception as Penn battled through 10 years of negotiations and much understood reluctance on the part of the McCandless family.

After the fateful decade-awaited phone call, Penn recounts that the screenplay came flowing out of him, without a re-read of the novel or need for notes. It truly was a product of the heart and soul; much like McCandless would have wanted it.

With the hefty weight of portraying this modern-day tragic hero placed upon Emile Hirsch’s fairly novice shoulders, and after many trials and tests of commitment and emotional endurance, the rugged charm of McCandless is channeled. Hirsch is best known for roles in Lords of Dogtown and Alpha Dog, but is put to the physical and introspective test as he lost 41 pounds for the initial scenes of Into the Wild and eventually dropped below 115 pounds to accurately portray McCandless’ final starved state.

Hirsch’s attitude was the key to the film’s success and his balls-out sink or swim mentality as he kayaked, scaled mountains and literally starved himself.

“Here’s a kid who just turned old enough to buy a beer in a bar and should have been out having fun with girls, and was able to do neither for eight straight months,” Penn describes Hirsch. “I watched him grow before my eyes.”

To this same effect, Hirsch became more deeply entrenched in his personal relationship with the late McCandless, as he continued to physically, mentally and emotionally attempt to recapture his slow downward spiral and grow to understand what may have motivated McCandless to do what he did. There has been years of speculation as to whether McCandless left for Alaska with a hidden agenda to never return, or whether he truly did make a sequence of minor mistakes that would eventually result in his accidental death.

“I think he was afraid,” Hirsch says. “I think Chris came up against the great barrier of the cold, uncaring harshness of nature and fully understood what the stakes were.”

With the most important piece in place as Hirsch developed into McCandless, Penn made the directorial decision to incorporate non-actors into the roles of the people that shaped McCandless along the way.

“You can’t find these people in the Screen Actors Guild,” Penn states. “I’m always inclined to find wonderful people out on the road who really have some space inside them.”

Whether it’s the grittiest or most banal aspects of reality, real life produces characters that need no sorted development or narrative arch, and Penn realized this exponentially in his employment of the likes of Leonard Knight and Brian Dierker.

Where do you find the greatest demonstrations of potent human nature? At the outskirts of society, just as McCandless had assumed.

Leonard Knight is the actual creator of the cult famed Salvation Mountain at Slab City, now pushing 80-years-old, and still consistently hunkered down by his hand, blood and sweat stained altar to Jesus that has become one of the best impromptu tourist attractions west of the Mississippi.

Brian Dierker, originally employed as the film’s Marine Coordinator due to his Grand Canyon and white water rafting specialty skills, had his involvement with the film bumped up a degree as he was cast as McCandless’ friend “Rubber Tramp” Rainey, and suddenly playing opposite Catherine Keener. Dierker, a man who plunges into roaring rapids like it was a walk in the park refers to his acting role and adrenaline rush of being in front of the camera as, “one of the scarier things I’ve done in the last few years.”

Penn prioritized the nomadic and dynamic nature of the film shoot, making sure his crew was all troopers and could keep up with the retracing of McCandless’ soulful journey. From the mountain top of Denali to the abandoned shores of the Salton Sea and into the Alaskan back country, if McCandless crossed one icy river so would the cast and crew.

Penn had selected Director of Photography Eric Gautier not only because he is a rarity, in the fact he does his own camera work, but also because of his landscape intensive thumb print as evidenced by his work in The Motorcycle Diaries. Penn explains he was enthralled by the way the environment of the film became an intrinsic and symbolic part of the story,and recognized the value of this trait in the cinematography of Into the Wild as well.

Raising the bar on cast and crew dedication, Gautier used no visual trickery to create intensity in each shot. How did he get the heart pounding shots of Hirsch hurdling through raging water rapids?

“By getting into the water,” he says. “It wasn’t just about going to the authentic locations, but about putting the camera wherever it had to go, whatever it took.”

Christopher McCandless left Emory, donated his life savings and took to the road with nothing but a backpack and the very basic need to connect. Young idealism, familial revolt and the need for a soulful cleansing led to a man’s final days in a VW van parked in the middle of Alaskan wilderness. A beautiful tragedy, a picturesque haunting image and human life at its most raw.

Into the Wild releases in select theaters Sept. 21.