Good Charlotte: Happy with Who They Are 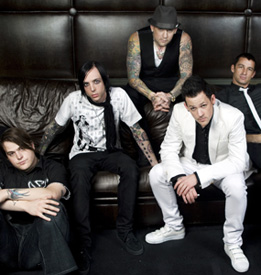 Opening for Justin Timberlake on his nationwide tour, Good Charlotte’s act will no doubt include a string of songs from its recently released album, Good Morning Revival. Many fans will confuse Good Charlotte’s new release with one of Timberlake’s hits, “Cry Me a River.”

Of course, the voice they’ll hear will be that of singer-guitarist Joel Madden, not Timberlake. In recent memory, Madden’s well-chronicled flings with pop-princess Hilary Duff and recently jailed socialite Nicole Richie are about as tumultuous as Timberlake’s relationship with Britney Spears.

Just as “Cry Me a River” appeared to be a not-so-cleverly disguised ode to Spears’ alleged disloyalty to Timberlake, many songs on Good Morning Revival have overtones of Madden’s relationships with Duff and Richie. So it seems fitting that Good Charlotte shares a stage with Timberlake.

What also seems fitting is that, by joining Timberlake, Good Charlotte is trying to redefine its image – something they have struggled with since the band members came together.

In what guitarist/keyboardist Billy Martin describes as a growing process since he joined the band in 1999, Good Charlotte does have a solid fan base to rely upon in choosing not to pay attention to questions of its identity. This is a good thing, considering that the band has received its fair share of criticism for the live-out-loud lifestyle of Madden – personified in the band’s biggest hit, “Lifestyles of the Rich and Famous” – who almost always finds himself on the wrong side in the court of public opinion.

Yet, Martin indicates that the band takes such negativity in stride. Reminiscing on the fun days when he started with the band, Martin says they have no problems with their identity and are not fazed by criticism.

Instead, Martin emphasizes the band’s desire to succeed: “We’re always trying to make a career out of this. We’re not trying to take the easy way out. Sometimes it’s better to take the hard way out and work a little harder for something to establish something that’s firm and something that’s real. We don’t want to be an overnight success.”

Indeed, Good Charlotte is doing all they can to evolve with the times and stay current without sacrificing too much of who they are.

“That’s really the hardest challenge we face now,” says Martin. “We’re not the young, new band anymore. The question is how to evolve with the times, how do you adapt to where music is going, without sacrificing who we are.”

Yet, Martin believes all questions of the bands images should be put away with the release of Good Morning Revival. Martin, along with the rest of Good Charlotte, holds strong in maintaining that they are not a punk band, but they just are who they are.

“We just have to be ourselves. I think we finally come to a point with this record where the sound that we have and the choices that we make are ‘Good Charlotte.’ We just do what we want to do.”