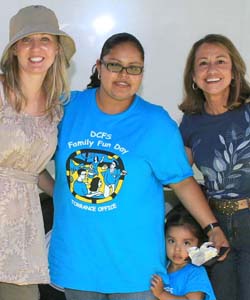 When Stacia Oemig was young, home was not a safe place to be.

“My brother and I went through years of fairly crazy stuff that our parents were putting us through,” Oemig says. “People from the department of family services would come to my door all the time, but I was terrified because I thought that I would be separated from my brother.”

Voiceless and trapped, it was only when Oemig got out of her home and into college that she realized that the freedom she had been seeking for both her brother and herself could have been attained by reporting the abuse they had experienced.

“Once I got out of college, I realized that had I reported the abuse, it would have been OK, I would have been able to see my brother and would have almost saved my brother,” she relays. “Now I regret that I didn’t do anything about it sooner.”

But fear, born of an uncertain future had stopped her when she was young and has stopped many children and young adults who have only heard horror stories of foster care and fear repercussions from their abusers, be they parents, teachers or others.

It was with her own personal experience in mind that Oemig founded Project Nightlight, a program dedicated to reaching out to young people who have been abused or know someone who has to show them how to escape their situations.

Project Nightlight is a charity that goes into after school programs to educate children about abuse and how to report it. It breaks through the nervousness of talking about abuse and cuts straight to constructive solutions.

“The concept of Project Nightlight is to break the shameful stigma of the ‘abused child,’” Oemig says. “Some people think it only happens with lower income families or all these negative things, but it can happen at any economic level at any zip code around the country.”

Beyond the educational component of the project comes work with children who have already escaped the abusive home or situation in which they found themselves.

“The other half of the program is with kids who are already in foster care. Foster care isn’t a great place. You’re separated from your family, you’re already traumatized by abuse that you’re experiencing so we’re trying to get these kids back into what they’re normally used to do,” Oemig explains.

That means toys for kids who have none and in some cases free skateboarding lessons, or clothes. Children who are taken into foster care are generally handed a black trash bag and given a limited amount of time to bundle up everything that was important to them. Project Nightlight tries to give some of that back.

But her favorite part is working with the animals.

“Sometimes the only friend they have is their pet before they get taken out of the home, so a lot of these kids were devastated when they don’t have a pet,” she says. “We try to bring out a dog or a cat sometimes and I love doing that.”

The children need the self-esteem and self-worth that Project Nightlight helps them get, Oemig says, but what they really need is something only a family can give.

“Love. It’s a stable loving force in their life,” she shares. “Of course they still love their parents and nothing’s going to replace that love, but they need something stable, whether that’s a foster home or a group home. They need emotional support.”

Project Nightlight has recently been working in East L.A., where Oemig herself goes and helps with the sessions. This is no easy feat, considering she, and the rest of the all-volunteer staff of Project Nightlight, have other full time jobs.

When she’s not writing contracts, Oemig spends sometimes 60 hours a week working for Project Nightlight. Not surprisingly, Los Angeles wasn’t quite the star-studded place she had hoped.

“I really want this not to happen to other kids. I had this vision of L.A. that you can make your dreams happen in L.A. so I decided that I was going to LA and I was going to start this charity,” she says.

It wasn’t easy leaving her job at IBM and moving from the East Coast, but Stacia Oemig had a dream and the perseverance to make it a reality.

“We want to give them all those options so that in 10 years when they have kids, that community won’t be abusive to their own children. It’s all about breaking the cycle in L.A. and teaching kids how to treat their own children.”