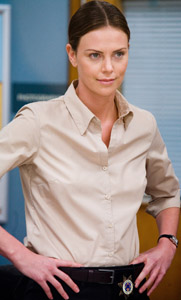 Not content with playing the role of the eye candy wife or girlfriend, Charlize Theron has sought out roles that are challenging and allow her to morph into fully drawn characters. Smartly following a Julianne Moore career blueprint, Theron alternates between prestigious Oscar hopefuls and popcorn thrillers – from The Cider House Rules to The Italian Job. Audiences and, maybe more important, studio executives have learned that Theron is no one-trick pony.

After the commercial success of The Italian Job, Theron was propelled into the stratospheres with Monster. Her chameleon-like performance as serial killer Aileen Wournos immediately won rave reviews.

After winning many critics awards, she picked up a nice bookend for her trophy shelf by winning the Academy Award for Best Actress. With her breakthrough now complete, as if to prove she’s not a one-hit-wonder, she added a second Oscar nomination last year for her role in North Country.

Theron’s next role is in Oscar hopeful In the Valley of Elah. Written and directed by Oscar winner Paul Haggis, Elah is based on the true story of a young Army enlisted man who goes AWOL shortly after his return from Iraq.

A murder mystery with broader implications at a time when so much attention is focused on our men and women in uniform, it’s the story of Hank Deerfield (Tommy Lee Jones), a war veteran, his wife Joan (Susan Sarandon) and police detective Emily Sanders (Theron), a civilian and struggling single mother, who joins forces with Hank to conduct the search for his missing son.

Haggis began casting with the Emily Sanders role. He sent Theron the script on a Thursday morning. Thursday night she read it, and Friday morning she called and said she was in.

She first met Haggis when she was on the awards circuit for North Country and he for Crash. “Everywhere I went we’d end up at the same table or talking to each other, and we really hit it off. I thought it would be really fascinating to go through some kind of working experience with him.”

While many movie characters are one-dimensionally good or bad, Theron liked the complexity of the character.

“Emily Sanders is a single mom who is just really trying to survive,” says Theron. “She wants to be good at her job, and she wants to take care of her son. I like that Paul really celebrated that she’s incredibly flawed and that she doesn’t get everything right all the time.”

Since Emily is given all the throwaway cases brought to the department, the missing person’s case that comes her way has a profound effect on her.

“She’s never had to deal with a case of this magnitude,” explains Theron. “She becomes emotionally involved in the case, and the job begins to affect her in a more personal way than anything she’s done previously.”

Besides being a mystery, Elah also deals with the psychological ramifications of war. We are bombarded daily with the physical and financial costs, but for those of us who only know about war from the media, we don’t often hear about the mental scars that returning soldiers bear.

“No matter how you feel about the war or where your stance is politically, the one thing you can’t deny is that we’re sending young boys and girls out there who experience a lot of trauma,” says Theron. “To bring them home, throw them back into this society and expect them to function as normal human beings is asking a lot of them. It’s a harsh reality, and we really haven’t been very honest about it.”

In the Valley of Elah releases in theaters Sept. 14.