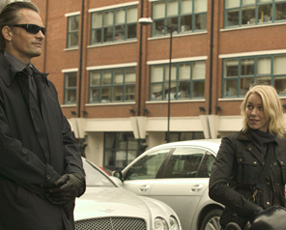 Director David Cronenberg (A History of Violence) weaves together a commanding tale of murder, betrayal and retribution in Eastern Promises, a film starring Viggo Mortensen (who also starred in Violence) and Naomi Watts (King Kong), and explores the dark underbelly of organized crime in the seedier areas of London.

One of the film’s greatest strengths is Mortensen’s portrayal of Nikolai, a mysterious, dodgy driver-slash-undertaker. Seemingly strong, stagnant and somewhat dangerous, Mortensen exudes a smart sexiness which makes him seem attractive and, at the same time, a bit more trustworthy than many of the other characters.

The film also succeeds in its cinematography, by Peter Suschitzky (A History of Violence), who uses some unique framing and camera angles to differentiate the film’s action sequences (including one featuring a naked Mortensen fighting bad guys in a bath house) from its more serene, drama-filled moments. Combined with Knight’s compelling story, Cronenberg’s straightforward direction and Mortensen and Watts’ multilayered performances, Promises delivers on all levels.