Calexico: Sampling from a Cross-Cultural Palette 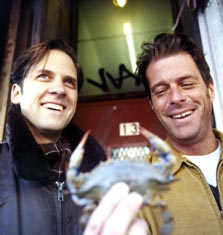 "It’s natural for a musician to be like a DJ of their own music in their head," Joey Burns, lead singer, lead guitarist and chief songwriter of Calexico enlightens me during a phone call from Greece. "Our style–what and how we play–is based on whatever appeals to us."

Calexico. The band itself is named after the California border town (the sister town on the Mexican side of the border is aptly named "Mexicali"). The hybrid of cultures that their name implies is also rather indicative of their unique sound.

While Burns describes the band as being "indie rock at heart," there is no mistaking the Southwestern flare that permeates every creative lick and rhythm that Calexico pounds out. While some songs have more of a mariachi feel than others, the dichotomous flavor of all of Calexico’s creations revisit the ultimate aim of rock n’ roll: to give aural pleasure through original and provocative music with a driving beat. Even with their acoustic basses and horns and the occasional techno remix, Calexico blends styles together with the same urgency and novelty employed by the earliest rock gods.

"We like to keep our music dynamic, yet let it change and show contrast from album to album. The whole process is very organic," Burns states. While it seems that statement is soaked with publicity hyperbole, it only takes one listen to any of Calexico’s albums to note that they are doing what so many bands set out to do but only succeed marginally in accomplishing. "Everyone has their own slant based on their influences, and that slant is reflected in the music as character. The fusion and blending of genres has always been occurring. I like unique music. I also like combining acoustic and electronic music. It’s very interesting to see where it’ll go."

Dance music. Techno. House. Electronic music. It’s regarded by some as the lowest form of musical expression on the evolutionary ladder. It’s the protozoa of art. So why bother messing up such beautiful Southwestern rock music with the stagnant droning of a drum machine? "Music," Burns says, "is always spinning and encompassing styles you wouldn’t expect. When it comes down to it, there are no boundaries for rock music across the globe."

Folk-rock. Punk-ska. Sitars and Beatles. Rap-metal. Whether fusions of genres leads to creativity or musicians simply believe the fusion of styles makes for creativity in and of itself, these hybrids have been occurring throughout this century. The "pop sensibilities" and Southwest desert music not only fuse fluidly and magnificently but seem to inspire the members of Calexico to take rock music (and the rock attitude) to new creative levels.

Says Burns, "Reading Steve Albini’s ‘The Problem with Music,’ you learn the importance of putting your own album out and doing things yourself. A band should never give away their creative control." Amen.

Calexico plays the Knitting Factory on February 28. Their new CD, Feast of Wire, will be available from Quarter Stick Records on February 18.