Blaxmyth: Ghetto Metal: The Next Level of Music 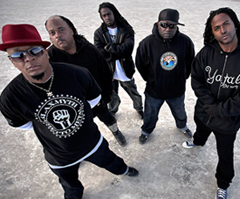 The term was coined by cofounder D-Roc of Body Count, the famous metal band fronted by Ice-T and infamous for the hit single “Cop Killer” from its eponymous 1992 debut. (The single created uproar among various law enforcement agencies for encouraging people to incite against cops.)

D-Roc founded Pitch Black along with Sackraphyce and Brimstone in 2000. By 2005, the band needed a name change and decided on Blaxmyth. The origin of its name is as unique as its sound.

Like a blacksmith or alchemist, the group “forges, shapes and reshapes metal and adds a little bit of themselves during the process,” explains Sackraphyce.

Freak modestly describes its sound as “Public Enemy meets Black Sabbath,” but there’s more it than just those two comparisons.

With influences including, but not limited to Jimi Hendrix, Iggy Pop, System of a Down, Bad Brains and Slayer, it’s difficult to pigeonhole the band into one genre. Blaxmyth jumps all over the map.

What makes the group unique, aside from its variety of influences, is the message in its lyrics. The lyrics are rooted in spiritual themes intertwined with political ideology. One could easily draw parallels between Blaxmyth and Rage Against the Machine in terms of political awareness.

Like Rage Against the Machine, Blaxmyth strives to mobilize its fans to become aware of their political atmosphere. It formed its own street team called the “Vanguard Militia.”

“You can’t have an army without soldiers,” says Sackraphyce. So the band formed the “Vanguard Militia” in hopes of creating something revolutionary, aside from its music.

“Jesus Christ was revolutionary,” shares Sackraphyce. “He came to wake up the brain dead … and that’s what we want to do as a band.”

The band knows its Liberal agenda might put off some potential fans from their music, but it doesn’t bother them.

“We don’t want the people we could potentially offend to be in our fanbase anyway,” Brimstone points out.

Johnny B continues, “The band has no particular political philosophy; we just stand for what is right, and we don’t take any partisanship.”

If there’s any label you can place on Blaxmyth’s political philosophy, it is as Johnny B explains, “truthism;” they are “anti-establishment because it is corrupt from the top to the bottom.”

Johnny B believes “the world is in desperate need of a human teacher,” and through the power of their music, they hope to inspire people to do what is right and fight for what they believe.

Blaxmyth in no way seeks to tell people how and what to think. The group believes that musicians have a platform to inspire their fans. Its lyrics reflect the members’ opinions about our current administration and how they believe it’s flawed.

Blaxmyth’s road to success hasn’t been perfectly paved. In 2004, D-Roc’s involvement in the band came to an abrupt end when he passed away from Lymphoma, a rare but deadly form of cancer. Sackraphyce and Brimstone decided their sound was “way too good to let die” and decided to carry on with Blaxmyth.

The first couple of months without D-Roc were difficult for the band.

“D-Roc is Ghetto Metal,” says Sackaphyce. “Without him there is no band.”

Although the band was D-Roc’s “baby,” Sackraphyce and Brimstone realized there was still potential to create something beautiful in honor of D-Roc’s legacy. Over the course of three years, the band went through a name change, lost a founding member and recruited three-fifths of their band to form what is presently known as Blaxmyth.

The band’s mantra since D-Roc’s passing has been: “The branches have to respect the roots.” In that respect, they have pushed themselves to extraordinary limits to pay homage to D-Roc.

Blaxmyth recently took part in Bodog’s Battle of the Bands, a popular television program that aired on Fuse. Though they came in second place, the experience has been nothing short of amazing, and they hope the notoriety and exposure from the show will further their musical aspirations in landing them a record deal.