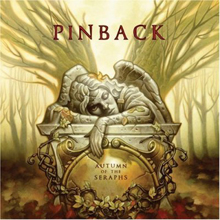 San Diego favorite, Pinback, is back with its fourth, fun-filled album, Autumn of the Seraphs. New to Pinback? This is its most accessible album to date as the band explores a more commercially viable side.

Usually this signals the end of an era for “indie” bands – a total disconnection from the hardcore fans that put them on the map – but in this case, that won’t happen. Though this album might get more airplay, Pinback does a great job of not reinventing the wheel; it just turns it a bit.

The current single, “From Nothing to Nowhere” is evidence that the boys turned in the direction of pronounced piano compositions, contemporary beats and the signature harmonious vocals of Rob Crow and Zach Smith. The more you listen to tracks like “Torch,” “How We Breathe,” and the epic “Off By 50,” it’s clear Pinback intends to continue traveling its musical journey, with a few stops in familiar and slightly unfamiliar territories.

Autumn of the Seraphs is currently available.