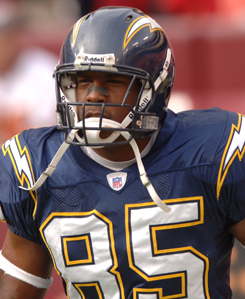 It’s your fantasy football league’s draft day. The phone is ringing off the hook. Time is winding down on the clock. And you’ve turned the living room into your personal “war room,” with snacks, drinks and Adderall nearby.

Fantasy football has grown beyond the realm of just sports stats junkies. In my own draft, one of the players’ mom actually drafted a team. She did complain that it took too long to complete (just over two hours).

Here’s a look at the top picks in this year’s draft.

QUARTERBACKS: If you’re looking for 30 TDs and 4,000 yards (and you should be) the men on this list are sure to please. Hint: Domes make for the perfect place to put the ball in the air.

PEYTON MANNING, Indianapolis Colts: Last year, he posted the highest QB rating in the NFL and won his much sought after Super Bowl trophy. He is at the helm of the league’s most potent offense that will only get better this year. Don’t be surprised to see him throw for 50 or more touchdowns this year.

TOM BRADY, New England Patriots: He has Randy Moss as a new target and always spreads the ball around. Combine that with an excellent defense and the Pats and Brady should have plenty of scoring opportunities.

MARC BULGER, St. Louis Rams: Scott Linehan’s high-powered offense revolves around his talented quarterback. Bulger has plenty of help and will certainly light up the scoreboard. Beware, he can be prone to turnovers.

RUNNING BACKS: Good picks at this position can catapult you to fantasy football success. Fortunately, the crop of productive backs is very deep.

LADAINIAN TOMLINSON, San Diego Chargers: The new “LT” is the most gifted all-around player in football. He can dominate by running or catching and is guaranteed at least 30 touches every game. He set the NFL single season rushing TD record last year and led many fantasy owners to victory.

SHAUN ALEXANDER, Seattle Seahawks: Alexander is one of the most consistent and productive running backs over the last four years. Injuries have slowed him recently but he is worth the risk.

WIDE RECEIVERS: They may guarantee victories, have grandiose end zone celebrations or show up to training camp in a purple SUV with spinning rims, but you gotta love ’em, especially if one of these guys is on your team.

RANDY MOSS, New England Patriots: He’ll have immediate impact for “The Dynasty” as he’s out to prove he’s worth the trouble. Brady finally has the big play receiver to put up gaudy stats that Moss’ fantasy owners will love.

TERRELL OWENS, Dallas Cowboys: T.O. has been on good behavior with a quiet offseason and preseason. That’s a good sign. Expect 100 or more catches and plenty of touchdowns from him. Say what you will about his off the field persona, the man is unstoppable when he’s on it.

CHAD JOHNSON, Cincinnati Bengals: This loquacious pro bowler is explosive, productive and the go to guy for the Bengals offense. His success is directly tied to Carson Palmer’s effectiveness.

TIGHT ENDS: The talent available at this position is vastly improved and drafting one of these studs can provide your team with an advantage that your competitors will envy.

TONY GONZALEZ, Kansas City Chiefs: He’s been the NFL’s most dominant tight end for quite awhile and still took his game to another level last year with over 100 catches. He’ll get his chances to have big numbers in the Chief’s potent offense.

ANTONIO GATES, San Diego Chargers: Gates is an imposing force and hard to bring down. With teams stacking the line to stop Tomlinson, he’s priceless in the red-zone and this is sure to make his fantasy owners very happy.

ALGE CRUMPLER, Atlanta Falcons: He’s the model of durability, having never missed a game in his four-year career. More important, he’s an excellent option in a passing offense that should have more flair under new head coach Bobby Petrino.

KICKERS: A big leg can be a big boost to your team’s chances.

ADAM VINATIERI, Indianapolis Colts: He’ll get plenty of chances to score, and he rarely misses. This future Hall-of-Famer is a great fantasy pick.

JASON ELAM, Denver Broncos: The thin air in Mile High makes for great opportunities to convert long field goal tries and add points for your fantasy team in the process.

DAVID AKERS, Philadelphia Eagles: Akers is one of the more accurate kickers in the NFL, even while playing in the wintry conditions of the Northeast. Plus, Donovan McNabb and company will set up to score lots of points.

DEFENSE: Drafting a dominant defense adds instant strength to your fantasy team. Remember, there are big points to gain from turnovers, sacks and defensive touchdowns.

BALTIMORE RAVENS: This defense scored seven touchdowns last year and remains stingy in the red zone. With Ed Reed patrolling the Ravens’ secondary and Ray Lewis seemingly everywhere on the field, this is a great pick to ride for the whole year.

NEW ENGLAND PATRIOTS: Bill Belichick has proved to be the master at adjusting to changes. If there’s any team that can do it, the NFL’s reigning dynasty can.

OAKLAND RAIDERS: They are stout against the run and effectively pressure the passer. Even though the team had a dismal record last year, this defensive unit was a lone bright spot.