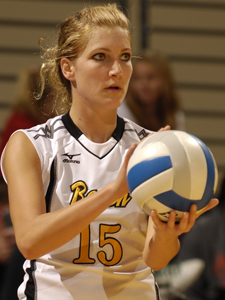 One would think that the sudden departure of a player would leave any team at a loss, especially if said player leaves after playing in the first two games of the season on a team that’s usually expected to challenge for a conference and a national championship.

But when you talk to the coaches and players of Long Beach State’s women’s volleyball team, they couldn’t be happier for their teammate, especially because of where she’s headed. Senior setter Dyanne Lawlor, who was working on her Master’s degree in psychology, left the team just weeks ago to accept a prestigious internship at the White House in Washington D.C.

“I can’t think of anything more exciting for a young lady,” says Long Beach coach Brian Gimmillaro, now in his 23rd year as coach at Long Beach State. “How can this be a loss when something so special is happening?”

For now Lawlor’s departure means that Nicole Vargas will be the lone setter on a team that was 26-6 last season and has struggled so far early this season. But Vargas, a 5-8 junior, is more than up for the challenge.

After all, she was a first team All-Big West Conference selection last season. She believes the 49ers will be fine and can still challenge for conference title and a national championship.

“Dyanne was great and could play so many positions,” says Vargas, who has struggled with right foot problems in the past. “I don’t feel any pressure all.”

A tough road trip to New York for the St. John’s tournament Aug. 31 through Sept. 1 resulted in the 49ers winning two out of three matches, including a three game to one loss to St. John’s. That, along with early season losses to No. 2 Stanford and an opening season loss to San Diego, dropped the 49ers out of the most recent top 25 coaches’ poll.

Returning from New York, the 49ers played host to No. 8 Washington on Sept. 6 and Florida State on Sept. 8 before hitting the road again to the University of Denver on Sept. 14. The 49ers will play two more non-conferences matches at home against Washington State and No. 13 Ohio (both Sept. 15) before opening the Big West Conference season on the road against No. 17 and defending conference champion Cal Poly San Luis Obispo on Sept. 21.

“It’s early, and I think the only thing that can really stop us is injuries,” says Gimmillaro. “If we don’t have any, we’ll be a very good team.”