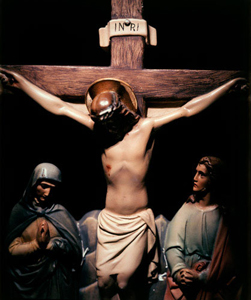 Cave walls. Clay. Bronze. Glass. Canvases. Urinals. Plastic. Given upcoming shows by Murakami, Gary Baseman and, opening this week, works by David Levinthal, toys are posed to be the next paradigm shift in artistic mediums.

While Levinthal uses a Polaroid camera to take pictures, the objects in his mise-en-scène are figurines posed in dioramas that would have any teacher sending their kindergartner to the counselor ad infinitum. In Passion, the photographer, in large-scale prints, depicts various episodes from the life of Jesus along with scenes of Moses descending with the Ten Commandments and Pope John Paul II.

Shot with the chiaroscuro techniques of Caravaggio and Rembrandt, light and dark areas are enhanced by the plastic toys’ reflective surfaces, giving life to these deadpan objects. In Jesus 2005, Christ hangs from the cross, his face hidden in shadow, the muscles of his arms expertly contoured by the interplay of plastic and light while Mary prays solemnly. That the ontology of these figurines is non-movement gives all the pictures added gravitas – these dolls, like the scenes they’re depicting, will endure forever.

As this isn’t Caravaggio’s time, one cannot have the Madonna’s passion without the Whore’s. The companion exhibit is a selection of prints from Levinthal’s Desire. As though looking, as voyeurs, through a clouded window, nude dolls present their breasts, bondaged bodies, high heels and whips. Printed on fetishized silver lamé fabric, the woman not only becomes an object, but already is an object.

Toys, religion and sex – if your mother threw away the former, these are the only three reasons you’re in therapy.