A Land of Opportunities: A USC transfer student talks about the journey – and his new life. 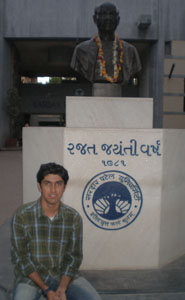 It’s 7 p.m. in the bustling airport of Ahmadabad (Western India). The crowd is here to bid farewell to their loved ones as they depart to foreign lands for higher studies.

Leaving behind their well-wishers, eyes filled with tears and a hope for better opportunities, students move ahead for baggage check-in. Last moment calls from family members, friends and girlfriends continue until the students enter the airplane – which has an individual TV for each passenger. What a luxury! (In India, normally dorms have only one TV shared by 300 residents.)

I switch off my cell phone thinking about the hundreds of Indians like me that spend thousands of dollars and a lot of time to study overseas. India, like any developing country, does not have full-fledged infrastructure to support higher education. Getting an American/British/Australian degree stamped on their profile gives them an edge over others in India’s highly competitive intellectual markets.

“In India, we lack exposure to the practical world and its day-to-day problems, which is not the case in the U.S.,” says Vihar Soneji, another Viterbi Engineering Student at USC.

The plane prepares for its takeoff. I hold my feelings and emotions together with courage to face the new world. Preserving teachings of your culture and accepting new cultures with a smile is what needs to be engraved deep inside.

Reaching Los Angeles, after a stopover in Singapore and a journey totaling 33 hours, most of the students open up a typical “flowchart” prepared by them at home, telling them where to stand (with exact GPS specified location), how to stand (as a stud or a classy lad) and the frequency in which they should speak with the cab driver.

In the coming days, I try to understand what makes Los Angeles seem so special to outsiders and what it took for my new university (USC) to become one of the leading universities.

While I roam through the city, I remember places that seem familiar despite the fact that I’ve never been there before. Then I realize that I have seen them: in Hollywood films.

One can find Los Angeles immersed in the fluids of music, art and cinema to an extent that no city in the world can match. Moreover, walking through the city you find people with their roots from all parts of the globe, showcasing the acceptance of Los Angelinos to outsiders. Like sugar in milk, everyone gets absorbed in this city, adding to its flavors.

Speaking about Los Angeles, Bhagyesh Ronghe, an international student shares that the city is a true metropolitan city with exotic locations and friendly, determined people.

At USC, though it’s one of the world’s largest private universities, no one finds himself out of place. It seems to have a typical “work hard, party wild” culture.

With its faculties and research breaking new records, USC is marching successfully to face future challenges. Being an engineering student, it’s an honor to study in classes that were once filled by Neil Armstrong and Andrew Viterbi.

“USC is great,” says Shixue Li, an international student from China. “First thing coming to my mind when I think of USC is the Trojan spirit which is so strong that I could feel it the first time I walked in this campus.”

And finally how can anyone forget to mention the hot girls on campus, with their boyfriends.

The university has some of the most innovative ways of teaching that makes learning easier. Klein Institute for Undergraduate Engineering Life (KIEUL) is one thing that’s worth a notice on Viterbi Campus, with its activities trying to make typical boring studies of engineering appear interesting. Technological support in class is also a thing that’s worth note, which students from developing students do not normally have exposure to.

Moving to a different world with no loved ones and only strangers around, it takes courage and determination to blend in and make yourself move ahead. Let’s hope that all new international students coming to the USA have pleasant times with happy memories to carry with them back home.