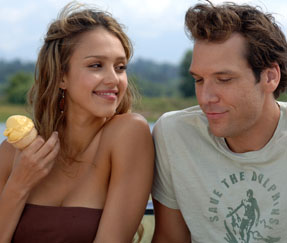 “I’m not cool at all, and I’m super clumsy,” proclaims Jessica Alba.

This might explain her latest film choice: playing Cam, a bumbling penguin expert opposite Dane Cook in Good Luck Chuck. Alba jumped at the chance to do the one thing that she feels has been lacking in her career – comedy.

In recent years, she’s been the action star/cupcake in a slew of successful projects like Honey, The Fantastic Four and the Fox action drama “Dark Angel.” Though these projects gave her the opportunity to explore new horizons, they left her wanting more. So, when the time came to act alongside Cook, the actress admits to a little intimidation.

“I was freaked out big time because I knew he was so good at what he does,” she relays.

Cook has built a cult following and packed auditoriums all over the U.S. with a few bawdy anecdotes and a hand gesture. Cook’s fans are rabidly loyal to him – some following him from city to city during his months touring.

However, any good comedian knows that you can only play the funny guy for so long. Pretty soon, you have to start branching out in another direction. This professional wisdom has led to the latest incarnation of Dane Cook: the actor.

His film career has erupted into roles opposite Demi Moore and Kevin Costner in Mr. Brooks, as well as playing love interest to bombshell Jessica Simpson in Employee of the Month. Cook’s profile rises with every A-lister that works with him. It seems that the cosmos was aligning for these two talents to take their respective careers to the next level, in tandem.

In the romantic comedy, Cook is Charlie, a serial dater that had a curse put on him as a kid. The affliction prohibits him from finding true love, because every woman that he meets and hooks up with, goes on to fall for the next man she meets.

True, this can put a womanizer in a pretty favorable position – scads of desperate ladies sleeping with the man that guarantees they will find a soul mate. However, Charlie soon begins to desire a special someone of his own. His main dilemma is how to woo the object of his affections without losing her to the stupid curse.

Alba loves the multi-faceted layers of this project. Unlike other romantic comedies, she feels that Good Luck Chuck has a bit more edge to it.

“It’s R-rated, and the world feels real,” she says.

The actress also grew quite fond of her costar. She and Cook spent a good time getting to know each other through the best ice-breaker there is – humor.

“We laughed so hard that my stomach was actually sore,” she admits.

But the role of Cam might not have been a reality for Alba who admits to having had different career aspirations as a child.

“When I was younger, I was really into Biology,” she says. “I loved stem-cell research and hybrids; putting it all together and taking it apart.”

Now her days are comprised of attending movie premieres and working with some of the biggest names in the business. She will appear alongside another notorious funny man, Mike Myers (Austin Powers: Goldmember), in the film The Love Guru. This should certainly give Alba the comedic credibility that she so craves.

About her preparation for this new avenue that she plans to travel, she’s quite candid confessing, “I [even hosted] the MTV Movie Awards so that I could be funny.”

Of course, she’ll always be that lovable and fabulous girl next door that women want to be and men want to date. Alba is as charismatic offscreen as she is in her films.

She does her best to remain easy-going in the chaotic field that she calls home. It’s that sunny disposition and winning attitude that has made her a favorite of the top names in entertainment.