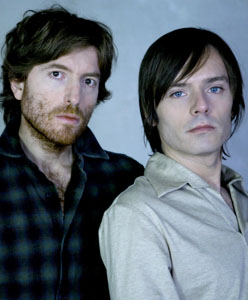 Quite a few ears were introduced to Jean-Benoît Dunckel and Nicolas Godin, a.k.a. Air, with the release of their first full-length, Moon Safari, in 1998 – to many, their best album and quite possibly the best electro-pop record ever made. For all those still in the dark, the exquisite soundtrack to Sofia Coppola’s The Virgin Suicides, which, like the film, was a masterpiece of dark, moody angst with such school day anthems as “Playground Love” quickly remedied the situation.

“I love that record,” agrees Godin. “It’s one of my favorites.”

And there are a lot to choose from. Last spring, Air released their fourth full-length studio album, Pocket Symphony. But when you count their numerous EPs – including a pre-Pocket Mer du Japon – soundtrack work on Coppola’s Lost in Translation and Marie Antoinette and collaborations with everyone from Phoenix’s Thomas Mars to Beth Hirsch and Françoise Hardy to the daughter of their all-time biggest influence, Serge Gainsbourg, you may have more compositions than you know what do with.

Dunckel, who met Godin at college in Versailles where he was studying mathematics (Godin studied architecture), even released his own solo album, Darkel, last fall.

Keeping it moving, even when the critics wish it hadn’t (its post-Suicides full length 10,000 Hz received abysmal reviews), is important to Air.

Godin agrees. “When [an album] is finished, we want to change style. Pocket Symphony is more abstract, very mellow. Now, we want to do something fast.”

Before they inevitably move onto the next sound back at home in Paris, Angelinos will get to hear some of the luscious sounds of this latest record at the Greek this month as part of a worldwide tour that started in March and will go through December.

Pocket Symphony was produced by Nigel Godrich, who, working with Air for the fourth time, has sweat alongside everyone from Paul McCartney, U2, Beck and Natalie Imbruglia to Radiohead, Travis, Pavement and R.E.M.

“Nigel is kewl,” Godin declares in his French accent. “We learn a lot from him, new perspectives. He helps us to make huge steps forward.”

Like the band’s albums before it, Pocket Symphony sounds like some elegantly moody soundtrack to a film that doesn’t yet exist. Since 1995, Air’s sound has been some hybrid of electronica, psychedelic rock and, well, Serge.

Asked why they sing in English and not in their native French, Godin offers, “It’s faster in English, and we don’t care what we say. We’re scared to feel ridiculous if we sing in French. We’re very into literature and poetry; it’s too much pressure to come up with French lyrics.”

What is different about Pocket Symphony, alluded to by the pre-release of Mer du Japon, is the use of Japanese classical instruments, for which Godin studied for a year with a teacher he found through the Japanese Consulate in Paris. Like Coppola, whose Lost in Translation featured Americans going through culture shock in Tokyo, Air finds themselves fascinated by the Japanese way of life.

“When we go to Japan, we feel very attracted to the place,” Godin explains. “It’s strange, it’s not about Asia; I don’t know what it is.”

Having attempted some traditionally Japanese sounds on keyboard while working with Coppola on Lost in Translation, Godin felt it was time to learn the instruments for real, “not just recreate them.” The result is a beautifully arranged piece of chamber music, with few lyrics and few dance-floor beats. Air’s given us tastes of their orchestra side before, but Pocket Symphony presents an unprecedented sophistication of sound.

It’s rare for two men to deliver both breakbeat dance anthems and orchestral chamber music, albeit with a heavy electronic emphasis, but Air seems to do it. And they do it well, engineering a sound that feels like meticulously designed landscape more than Spector-style pop.

Maybe those years of mathematics and architecture paid off…