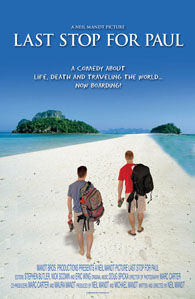 Perhaps one of the best parts of traveling abroad while you’re still young is meeting up with kindred souls on the other side of the world and swapping stories. It seems as if even the most subdued of travelers always has at least one crazy tale to relate in its full, graphic glory if you just ask.

Last Stop for Paul does an amazing job of capturing this phenomenon. This web series-turned-film follows the journeys and exploits of coworkers and friends Charlie and Cliff as they make their pilgrimage around the world and, ultimately, to Thailand’s Full Moon Party in the hopes of finding closure for the death of Cliff's friend, Paul, by sprinkling his ashes around the world. Along the way, we are presented with reenactments of the crazy exploits of the people our heroes meet along the way as Charlie and Cliff experience some new stories of their own.

Film snobs and big-budget lovers, be warned that this is obviously intended for the web. The picture quality definitely has that flat, YouTube look to it that actually reinforces the “travelers on a shoestring budget” motif but may turn off some viewers.

Likewise, the acting seems to swing between over-the-top to extremely understated with reckless abandon, but this can be forgiven as part of the charm of the piece, especially among the locals in the film (some of which seem to not even understand the lines they are delivering).

In the end, this film grows on you and, like a story from a new friend, it stays with you long after it’s over and, possibly, even inspires you to go traveling and make a few new stories of your own.

CityWalk AMC Theatres is located at 100 Universal City Plaza in Universal City. Last Stop for Paul will be screened as part of the Cinema City International Film festival. For more information about the festival, visit www.cciff.com.