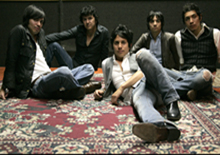 The end of summer came too soon, and Los Angeles experienced one of the greatest heat waves ever with temperatures soaring above 100. But before we said goodbye to staying up late on weeknights and going on awesome vacations, the Summer Strummer Festival, consisting of 40 bands and numerous vendors, helped bring the season to a close.

Though a copious amount of performers jammed throughout the festival in the blistering heat, there was one band on the roster that stood out, Astra Heights.

Brothers Mark, James, Joshua and Timothy Morales have been rockin’ for seven years and counting. And their latest addition to the group, Bernard Yin (who is not related by blood to the rest of the band members though no less of a dynamic addition) helps amplify the band’s amazing harmonies.

“We all wanted to work together because all of us brothers are really close,” they agree. “But we didn’t know how.”

Though at first they were in limbo about what they should do as a family, they eventually decided on creating a band.

One would think with a band consisting of brothers, minus one, there would be sibling rivalry perhaps, but this band is not like most. No, this is not a Jackson 5 replica or another Partridge Family. This is Astra Heights.

“To do something you truly love with the people you love” – they can’t express their feelings towards each other and their music any stronger.

After Mark, James and Joshua came back from college, they recruited their little brother, Timothy, and began to put their musical talents to use.

“We just started playing Beatle covers,” the brothers explain. “Then once we learned a few songs, it kind of just snowballed.”

They now play in different venues around the United States. Originally from Texas, they moved to Los Angeles in hopes of making it big.

Those of us who live in Los Angeles know there are a lot of bands, and many of them sound alike. But Astra Heights is in its own realm. It’s something fresh and new that rock ’n’ roll hasn’t heard in awhile.

“It’s not based on a lot of music nowadays, which is based on the super guitar heavy distortion, blowin’ your mind out so by the end of the set you’re deaf,” they point out. The fact that they can actually harmonize their voices without the heavy guitar riffs smothering their vocals makes them even more awe-inspiring.

Their song “The March” is reminiscent of feel-good-music during the days of the Rolling Stones, the Who and even the band whose music they used to practice to, the Beatles. It’s catchy, it makes you want to dance and best of all, it’s different.

“For us to be able to create music that not only affects us but other people, then it’s very beautiful that we are able to do that,” they say.

There’s no second-guessing when you hear their music. Their distinction is similar to the uniqueness of bands such as the Strokes or the White Stripes.

Accompanying its one-of-a-kind sound, it also has a distinguishable name.

Jonah was the original name of the band, but when they went to copy write it, they soon discovered it was already taken. So they turned to two names they were fond of: the Heights, being the name of a neighborhood in Houston, Texas and Astra, deriving from a Latin phrase that means “the stars.” They took the two words, combined them, and Astra Heights was born.

The individuality of each brother gives the band’s music its style. For example, they have different tastes in music.

“We butt heads from time to time when we are collaborating,” they admit. “But each of us has a uniform sense of what we want to sound like.”

At the end of the day, these brothers are just having fun and reaping the reward of blending family and finance.

“It’s fun to be in a band of brothers. Whether or not we are in a band, we always are going to love each other, and we are here for each other.”