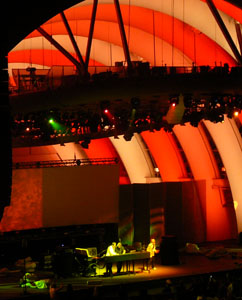 If Underworld’s music were fists, they would kick your ass; thus transforming a normal concert into a musical prizefight. The night began with DJs Carmen Rizzo and Paul Oakenfold dishing out some mellow electronic grooves.

Just after sunset, round one began: Karl Hyde, Rick Smith and Darren Price took the enormous stage, warming the pulsating crowd up with tracks off their upcoming album Oblivion With Bells. “Crocodile,” the first single off Oblivion, immediately won the crowd over.

Each crest of the Bowl lit up in every color of the rainbow, as large inflatable pylons flopped all over the stage. The concrete floor of the stands trembled as the beat-filled boys transitioned into arguably their most popular single, “Born Slippy Nuxx,” made famous from the movie Trainspotting.

After nearly two hours of whipping the crowd into shape, Underworld went for a TKO and taunted the beaten crowd with an encore of “Jumbo.”