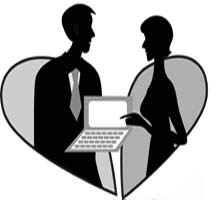 Such lovelorn resignation is now a thing of the past. Thanks to Kizmeet, the latest social networking site that fuses traditional dating services with the everyday functionality of Craigslist, those parting glances and heart fluttering moments may turn out to be retrievable after all.

Kizmeet, which dubs itself “the only Web site entirely devoted to helping you find your ‘missed connections’” serves as an interactive forum in which users can post and search for could-be loves they met and lost in the real world. Kizmeet differentiates itself from other dating sites that seek to match complete strangers with the unlikely prospect of generating chemistry.

By contrast, Kizmeet builds upon a spark that has already happened in the real world and seeks to reconnect users with that special someone. Unlike tedious dating sites like Match.com and eHarmony, it’s remarkably simple to use, requiring no cumbersome registration, no credit card information and no user profile.

“We wanted to make the site as easy to use as possible,” says Kizmeet founder Mark Jaffe. “And it’s really a lot more user-friendly and fun than most dating sites.”

The site is organized into nine main categories including College Campuses, Gyms or Bars exclusive to the city in which one lives. This kind of specificity allows users to pinpoint their exact moment and place of contact and post or search anonymously within that subsection. Even smarter, the site also has the capacity to narrow the search by chronology, allowing new users to search for missed connections that may have happened weeks or even months earlier.

In other words, Kizmeet allows people to take destiny into their own hands. But the obvious skepticism rears its head about the likelihood of these connections occurring for the majority of users.

Is the site still compelling enough if people are unsuccessful in their search for a missed connection? In response to this question, Kizmeet is expanding its content and emphasizing the fun factor inherent in many of its features.

For example, the site now includes a best-of section highlighting the most amusing and poignant postings in the site’s young history. One of the more entertaining postings reads, “Yes, we met at Kmart!! In kitchenware. Embrace our mutual shame. It’ll be our dirty lil’ secret.”

What’s more, the site has also recently added a “mouthing off” forum that enables people to rant about issues ranging from bizarre missed connections to dating horror stories to people looking for advice.

“Even though Kizmeet is about connecting with that other person, we’re also starting to build out more content for the site because we know that those connections don’t happen every day for everyone,” says Jaffe. “So, the ‘mouthing off’ is kind of our first step of doing that.”

For a site that’s been around for less than a year Kizmeet is generating an enormous amount of traffic. This initial buzz has given Jaffe the confidence to expand the site throughout the country.

“We launched with eight cities, we’re at 17 now, and we just keep expanding. Every day we get e-mails asking for us to launch in new cities, and not just in the US. Places like India, Israel and Hong Kong, for example.”

And don’t think that Kizmeet isn’t taking aim at this international market. The great thing about a site with such a direct concept is that it translates nearly universally across cultures.

“The idea is that Kizmeet can be in every city around the world,” explains Jaffe. “We want to expand throughout the US and then go to Europe and Asia, and we’ve been talking to partners who can help us roll it out in those areas more quickly.”

For now, Kizmeet remains strictly in North America, but don’t be surprised to see postings in Mandarin and Sanskrit asking if you were the cute gal in the tight spandex checking them out at the gym last weekend.