Jennifer Garner: Slips out of Motherhood into the FBI 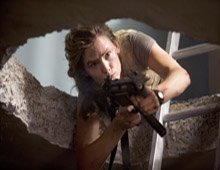 As Jennifer Garner saunters into the pressroom, journalists can’t help but ogle her beautiful frame.

“What are you wearing?” a man yells.

Then she adds, “I’m trying to dispel pregnancy rumors.”

The mother of a not-quite two year old is just as known for her past roles as her current hubby, Ben Affleck. Though writers try to stay focused on the task at hand, interviewing her about her latest theatrical incarnation as forensics examiner Janet Mayes in The Kingdom, questions about Ben keep popping up.

“What did Ben think about your big fight scene in the movie?” someone asks.

Jennifer is not phased or shy when talking about her real life Romeo.

“He was visiting the set the day I shot the fight scene, and I thought it would make him nervous to see them chucking me,” she shares. “But he was a little too calm about it.”

What about the prospect of her starring in an Affleck-directed flick, à la his debut Gone Baby Gone (due in October)?

“I wouldn’t star in a movie Ben directed because someone has to take care of the kid, but I hope he finds a small part for me some day.”

And would you believe the daughter of two big screen stars doesn’t even watch the small screen?

“She hasn’t watched TV yet,” Garner admits, adding, “I want all the attention.”

After the family questions have come and gone, it’s time to get to the raison d’être. First up, critics are raving that director Peter Berg has choreographed an amazingly exquisite finale fight scene. Garner, no stranger to ass kicking, agrees.

“To be honest, I thought it wasn’t going to be much of anything,” she begins. “I kept saying to my stunt double, Shauna Duggins, who I’ve worked with for six years and who is my partner in crime, when are we going to rehearse the fight scene? We go in 110 percent prepared. I can still do the fights from Daredevil in my sleep and ones from ‘Alias.’ And she said, they keep saying we don’t need to rehearse.

“The day of the fight scene when I showed up, her eyes were this big and her hair was out to here, and she said this is unlike anything we’ve ever done before. Get ready, we’re just going to try to beat the shit out of each other. It turned out to be an amazingly real scrabble. We had a blast.”

She continues, “It was so down and dirty that we had scratch marks on my face that we had to cover up for the next few days of shooting. It was nasty. It was great.”

Being a new mommy did present some new challenges for Garner: Berg could not stage any scenes with somebody touching her breasts.

“He had to stay away from my boobs, and he did,” she declares. “That was the one sacred thing. He could go for my head and hair.”

Another obstacle was enduring the heat.

“I spent two nights in the hospital,” she says. “Out of all the stuff I’ve ever done I’d never had to go to the hospital. I just was dizzy and didn’t feel right. After all was said and done it was too hot, and I was in the heat for too long everyday to be breastfeeding for my body.”

From too hot to cold, Garner’s next role takes her to New York City. Starting Oct. 12, she takes to the Broadway stage starring in “Cyrano de Bergerac” opposite Kevin Kline.

“I was so excited,” she reveals. “It’s always been my absolute dream of all dreams. I was always meant to be onstage. I only ended up even auditioning for TV and movies because I was understudying a play on Broadway, and I was so broke that when I got a miniseries I had to take it.”

With so much on her plate, you’d think she might take her blessings for granted. Not so. “It’s hard for women to find roles, much less strong ones,” she says. “I’m lucky. I’m working.”

The Kingdom releases in theaters Sept. 28.