!!!: Finally Getting Paid for Play 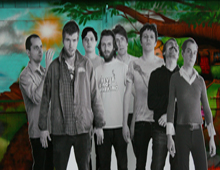 The name will slap you in the face without a second to react: !!!. On the surface, it means nothing. But the name itself is the essence of this Brooklyn-based, eight-piece dance machine.

Rocking the most creative name in all of modern music, !!! – pronounced by repeating any three identical monosyllabic sounds – is as unbelievable as the band’s name suggests. Call them Chk Chk Chk, as they are most popularly known, call them Bang Bang Bang or Pow Pow Pow, this octuplet is an unstoppable force with one mission: Keep the party going.

No matter how rapidly the vast dance-, disco- or funk-punk genre has grown in recent years, !!! remains the most experimental pioneering outfit of the day, mixing an endless array of distinct, almost clashing, musical genres, bizarre polyrhythmic sounds and sporadically shifting tempos that could quite possibly mimic a disastrous train wreck, a cocaine-wrapped “Candy Land,” a psychedelic carpet ride and a LCD-induced midnight romp through Winnie the Pooh’s 100 Acre Wood, all crammed into one.

Besides its curiously peculiar moniker, !!! is infamous for its wild onstage antics and 100-miles-per-hour live shows. Often cited as the best live act of today, the band is known to dance and rock harder than the dance floor fiends in the audience, equipped with numerous percussions, funky horns and spastic dance moves à la Napoleon Dynamite. “You pull everything that you are at that moment, and everything comes out,” says vocalist Nic Offer of performing so erratically. “Whatever we are feeling at the time comes out. A lot more thought is put into the record as you’re making it. Playing live is a lot more instinct.”

With the release of its Myth Takes album, !!! has undoubtedly progressed in its songwriting abilities.

“Something different happened on this record,” says Offer. “A lot of things happened that made an effect on this record. We made a conscious effort to communicate more. The other record [Louden Up Now] was flawed because we didn’t communicate as much.” Writing the majority of the album in a desolate rented house in Nashville, Tenn., the band took on a new writing method to perfect the album.

“We used to write all the songs together,” relays Offer. “We kind of split into smaller groups for this record.”

With such a large band, the rehearsal logistics may seem impossible and unproductive, but the band practices a democratically open method.

Though this new songwriting formula proved successful in the album’s final outcome, the band had no clue where its new material would take them.

“We had no idea how this record would turn out,” says Offer. “Music is a journey, and you don’t know where you’re going to end up. I don’t like putting on albums and getting exactly what I expected to hear.”

More sonically intact than their previous releases, Myth Takes sees !!! as the funky unit in an ongoing musical journey, living by one mantra: music for the sake of music.

“We didn’t start getting paid as a band ’til just a couple of years ago,” says Offer. “We didn’t make money for the first seven or eight years. It’s always about making the music. We just feel lucky to have gone this far.”

Formed in 1995, !!!’s 12-year tenure has evolved throughout the years, its sound and onstage persona developing immensely.

“I would hope any band together that long would change. Your odds are better with change,” says Offer.

With a recent relocation to New York, !!! now openly admits that being around their globally esteemed dance-punk peers, including LCD Soundsystem and the Rapture, has left a major impact.

“Moving to New York is a big step in how we grew. Being in a scene where everyone was good kind of makes us swim.”

Myth Takes is currently available. !!! will perform Sept. 26 at the Avalon in Hollywood. For more information, visit www.chkchkchk.net.