Wattstax: I Am Somebody!: Now-Oct. 28 @ California African American Museum 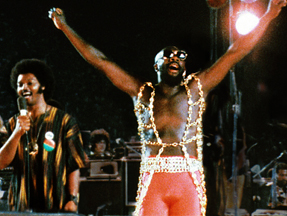 For those of us not even born at the time, or for everyone who wishes to relive Wattstax ’72, the legendary concert held at L.A. Memorial Coliseum, better known as the “Black Woodstock,” now is the time at the California African American Museum.

I was feeling the music as well as the magic as soon as I walked in, as old newspaper clippings and magazine covers adorned the first wall of the museum. Although we still have many walls to rebuild for equality here, it was nice to view pictures of a day when people all came together.

I actually watched the Wattstax movie continuously playing for hours. The historically positive celebration of Black culture was literally home now, right around the corner from the place where it all happened.

Taking a stroll around the museum looking at the photos of the performers, one can only imagine the electricity in the place that held over 100,000 people. Hosted by a young Jesse Jackson, popular stars like Isaac Hayes, the Staples Singers and the Bar-Kays played, as well as some lesser-known but just as incredible performers such as the Soul Children, Rance Allen and the Temprees.

Richard Pryor, who had only just begun to gain a little fame a few years prior, only to drop out of comedy, made his successful return here at Wattstax with his rated-X material that would eventually become his incredible legacy to the comedy world.