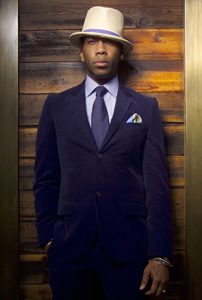 As easy as walking down the street is for most of us, singing and songwriting comes natural to Rahsaan Patterson. A pioneer of the Neo-Soul movement, he was a Neo-Soulster before the term was hip.

Formerly one of the stars of the children’s TV show “Kids Incorporated” alongside pop star Fergie, Jennifer Love Hewitt and the actor turned reality star Mario Lopez, Patterson has been on stage and in front of a camera since he was a child.

“‘Kids Inc.’ was an awesome experience,” he says. “It truly taught me to be professional, take direction and work in an ensemble and to fully express myself. It also played a huge role in the diversity of my music, particularly songwriting.”

Though it appears that his former cast members have had more media attention, Patterson feels his time is coming. The independent release of his fourth album, Wines and Spirits, not only marks Patterson’s place as one of the leaders in the Neo-Soul movement, but it will give Fergie’s hits a run for their bullets on the charts.

Writing a good song and writing a hit don’t always go together. This has never been a problem for Patterson. He has penned tunes for Tevin Campbell, Chico DeBarge, Donnell Jones and Jody Watley, and helped push a few Brandy songs to No. 1 with producer/writer Keith Crouch, who also worked on Wines and Spirits.

The album’s first single, “Stop Breaking My Heart” is typical Patterson, while songs like “No Danger” and ‘”Pitch Black” show a deeper, more mature and experimental R&B. Some of his new songs could be played on KROQ or KIIS FM.

For some, this will be their first introduction to Rahsaan Patterson. His self-titled debut release came out on MCA in 1997, followed by Love in Stereo in 1999. Next, he independently released albums on Artistry Music Group (2004’s After Hours, Wines and Spirits).

Being independent gives him the freedom to be who he is.

“It takes a lot more of a conscious effort as an artist to make sure all the proper business aspects are focused on and implemented,” he says. “It can be a bit much, but it’s worth it. It’s very important to have an excellent team to help make it happen.”

Greats like Chaka Khan and Stevie Wonder have given Rahsaan their blessings. They have often jumped on stage to be a part of his show or have invited him to be a part of theirs.

“It’s an honor and a privilege, a dream come true,” he shares. “My family, my spirit, my friends and the fact that I’m a fan of great artists and great art keeps me humble. It’s a special feeling to be moved and inspired by art, so the fact that anyone feels that way for me or my work is and always will be heartwarming.”