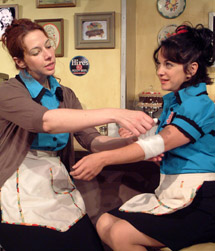 When obsessed Dolly Parton fan Jolene (playwright and lead actor, Jesse McCormack) welcomes a handsome stranger into the diner she works in, all hell breaks loose in the premiere of “Journey to Dollywood.” It’s a premise as ancient as the automobile; Joshua (a decent performance by Henry Gummer, The Good Shepherd) breaks down in a small sleepy Southern town and meets the waitress in the local diner while waiting out the repairs.

Jolene is instantly attracted to him and eyes him up to be her potential new boyfriend, but her conniving coworker Cici (a hilarious Melissa Greenspan, “Katbot,” “Providence”) also takes a shine to the out-of-work out-of-towner. Enter Manny (a solid performance by Erik Van Wyck, “All My Sons,” “Mutant Sex Party”), Jolene’s current Romeo, and it’s all aboard the Heartbreak Express.

Secrets and lies are bubbling over in the two-act play. The four-character piece has some lovely moments.

Witty banter is the house specialty, but it’s a frothy light meal. There are some wonderful laugh out loud zingers, but the story does not rise far above its sitcom tone.

There are, however, some top notch performances. Greenspan’s comic timing is impeccable. Van Wyck is a handsome and charismatic performer.

Ultimately the play rests on Jolene’s character. Jolene’s eccentric nature is overplayed by McCormack, and she’s inconsistently shrewish and unlikable at times.

She overreacts to minor developments and takes some major tremors in stride. She’s cruel to her lovable lug nut fiancé by using his infirmity for laughs.

Luckily McCormack surrounds herself with a trio of talented actors. “Journey to Dollywood” isn’t exactly a winning hand, but it’s filled with little treasures.