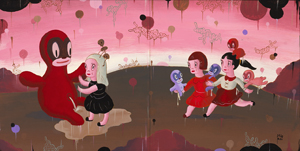 Exhibiting a bizarre mix of childish innocence and devilishly adult themes, Gary Baseman is a pervasive artist who wears his paint on his sleeve. His colorful paintings depict an unusual tangle of bright-eyed girls and drooling characters in situations with strong sexual overtones, yet with an air of youthful purity.

Much like his art, Baseman himself is sweet with a rascally temperament and fire behind his eyes. He has been a force in the art community for years, finding success as an illustrator, toy designer, Emmy-winning creator of the ABC series “Teacher’s Pet” and a fine artist.

A L.A. native, Baseman is a big supporter of the lowbrow and alternative art scene here. He continues to push the envelope by blurring the lines between art, fashion, toys, mixed media and conventional thought.

His latest attempt at this blur came with the launch of his handbag line for the seatbelt-bag-maker, Harvey’s. Baseman’s line includes three designs featuring his darlings; Marilyn, Venison and Creamy.

Billy Shire Fine Arts Gallery recently played host to Baseman’s Hide and Seek in the Forest of ChouChou show. The exhibit featured ChouChous, characters that according to Baseman “take all the negative energy and hate away by releasing creamy gooey love out of his belly button.”

Baseman’s eyes dance as he talks about building his empire. If this is the beginning, the art world better strap in for his fluid filled journey through innocuous debauchery.