"The Boondocks": Aaron McGruder's ready for Round 2. 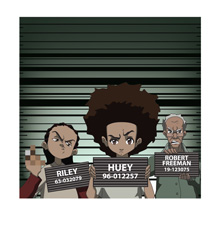 On Nov. 6, 2005, Sony Pictures Television/Adult Swim Channel launched a late night animated show called “The Boondocks.” For many it was their introduction to the Freeman family and the esoteric world of creator Aaron McGruder – a first glimpse at the intricate story lines that connect young Black America to the older generation, with hip-hop as its soundtrack.

But for diehard fans (and there are more than a few) who have been following the strip since the late ’90s, McGruder’s social commentaries made through the various characters in the cartoon always hit close to home. Brothers Huey and Riley Freeman, aged 10 and 8 respectively, are the two central characters that represent the complexities that exist within this generation.

Huey, named after Black Panthers co-founder Huey P. Newton, is the more “conscious” of the two and has left wing tendencies. He observes the world around him with a critical eye, while frequently reflecting on the ignorance perpetrated within and surrounding the African American community.

On the opposite side of the spectrum is Riley, who attempts to emulate the gangster ethos. He is forever drawn to street culture, complete with thug diction.

This duality becomes even more interesting with the presence of their retired and eccentric granddad, Robert Freeman, who acts as disciplinarian, but serves as a window into the mindset of the older generation and its relationship with the youth.

“I always like to pull back a little bit and see a bit of a broader picture,” explains McGruder. “It’s not about indicting the older generation. I think there’s a lot of fun to be had in looking at how we behave as black people.” And that’s just the top layer of the cake that is “The Boondocks.”

The brainchild of Chicago-born, Maryland-raised McGruder made its debut in the University of Maryland’s The Diamondback newspaper in late 1996. It quickly transitioned its way into various publications ranging from The Source to The Washington Post to the L.A. Times.

The strip garnered critical acclaim and a faithful fanbase. Before long, readers got what they wanted, and a television show was born.

“I’ve got a certain way of looking at the world, and I think that the reason why the show resonates with people is because they look at the world the same way,” McGruder notes about the success of the show. “I think a lot of people think shit’s kind of crazy. And probably for a long time didn’t think other people thought that. Every now and then you watch something and you’re like, ‘Oh, I’m not alone.’

“It’s an insane show I guess, but I think culturally it connects with the part of people out there that are kind of frustrated and wondering what’s going on and saying that things don’t really make sense, or don’t really add up.”

Critics seem to agree with McGruder. Despite its share of controversy stemming from its political satire aimed at the likes of Ronald Reagan and Condoleezza Rice, “The Boondocks” was recognized with both a Peabody Award and an NAACP Image Award.

“That was a huge deal,” McGruder points out. “It’s obviously a very prestigious award, and it was our first year. We really didn’t know what we were doing in terms of making a show like this.”

Despite swimming in uncharted territory, “The Boondocks” continues its rise to success and on Oct. 8, fans can look forward to the return of Season Two. Guest voices will be Busta Rhymes, Snoop Dogg, Usher and Donald Faison, just to name a few.

Though it’s too early to speculate as to whether there will be a season three, there have already been talks of a film.

“We are working on that,” McGruder reveals.

Working nonstop on the TV show for the past three years, McGruder remains focused and determined to execute his vision as it was intended to be. In terms of its innovation and cultural relevance, “The Boondocks” has drawn obvious comparisons to “Chappelle’s Show.”

“I don’t know what the future of my show is, and it’s not really up to me entirely,” he says. “But I feel like if we could make a good show this year and people liked it and if we could be as commercially successful as Chappelle, that’d be great.”

At the end of the day the bottom line remains simple: “I want it to go for as long as it’s good. It doesn’t need to go any longer than that.”