Amir Bar-Lev: My Kid Could Paint That Raises Questions About the Nature of Art 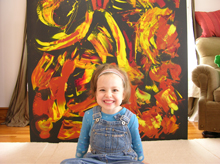 Marla Olmstead, a girl with a penchant for painting, was four when producer/director Amir Bar-Lev began documenting her and her parents’ life. When a four year old is deemed a prodigy, the parents have something to do with it. Whether it’s taking them to practice, pressuring them to practice or making them perform in front of people, parents can make and often break their kids.

“Anytime you have a four-year-old celebrity, that in and of itself brings up interesting issues about the way fame works,” Bar-Lev says, explaining why he picked Marla as the topic of his second feature film.

“In this case, because she was a four-year-old prodigy in painting, it brought up interesting issues about how one judges art,” he continues.

“Then when I met the family, they are not those kind of show parents you expect of a four-year-old celebrity. I thought, this is going to be an interesting family drama, and all those issues – art, media, fame and money – are going to play out, not in some dry academic way, but in a cinematic, novelistic way. I didn’t have any question about the authenticity until ‘60 Minutes.’”

Midway through filming, CBS aired its “60 Minutes” segment insinuating Marla’s father may have given Marla direction while she painted, or even polished her pictures after she was done. The family’s life was thrown into upheaval, as was Bar-Lev’s. Racking his brain about what to do, he decided to insert himself into his documentary, thus pointing in a small way to the role of the director in shaping people’s understanding of the world.

“I began thinking about putting myself in after ‘60 Minutes,’” Bar-Lev shares. “The making of the film became a plot point, the family turned to the film in the hopes it would exonerate them.

“The fact that I didn’t have knock-out punch evidence in either direction confronted me with the knowledge that whatever 90 minutes of footage I chose to put together out of this year I spent with the family was going to have real world consequence for the family. People are going to draw conclusions about the relative innocence or guilt of the Olmsteads based on my construction.”

On one hand, whether or not the father, an amateur painter himself, helped Marla create or finish any of her paintings is a non-issue. She was four, and there’s actual footage of her completing pictures that look similar to the ones she sells for thousands of dollars in the galleries.

Yet throughout, Bar-Lev is hard pressed to make a definitive case for either side.

Marla is almost seven. She continues to paint and sell her work in galleries.

On the eve of the release of My Kid Could Paint That, Marla’s mother has expressed her disapproval with some of the ways her family is portrayed in the film. But Bar-Lev sees the bigger picture.

“In one small way the movie is about ethical quandaries,” Bar-Lev begins. “One of the ethical quandaries was if you feel critical of the publicizing of this four year old, why involve her in a documentary which is yet another venue in which her face is going to be plastered all over the place? I wondered at a certain moment whether to move on with the film.

My Kid Could Paint That releases in theaters Oct. 5.