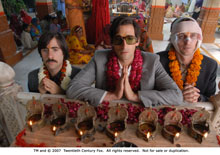 Wes Anderson’s genius can be measured in the unique ebb and flow of his film work. From Bottle Rocket to The Life Aquatic with Steve Zissou, this master of quirk has explored – with great intelligence – the dysfunction of the American family.

In his latest offering, Anderson takes a dramatic step back into the land of brotherly love, linking Jason Schwartzman (Rushmore), Owen Wilson (The Royal Tenenbaums) and Adrien Brody (The Pianist) as siblings. In an attempt to rediscover each other, they set off on a trip through India on a train called the Darjeeling Limited.

Anderson’s signature move – the awesome slow-mo tracking shot, set to the music of some has-been folk legend – is back and in full effect. But this time around, the remaining action is presented with less fanfare and biting wit than his previous films.

Interestingly, there is also a 17-minute short film called Hotel Chevalier that acts as a prequel to this feature. However, for some bizarre reason, the powers that be have decided to save that valuable morsel for iTunes and the DVD. It’s that decision that sets off the downward spiral of this movie.

I sympathize with any auteur that has to constantly reinvent himself due to the legions of copycats within the film community. But Anderson’s most compelling attributes are his storytelling and dialogue, and in Darjeeling, both are seriously lackluster.

Placed among the long list of features that he has put his stamp on, Anderson’s latest can be considered a natural progression in the career of a man who is a true artist.

Unfortunately, it’s just not a noteworthy one.