Muse: Staving off Radiohead Comparisons, English Act Comes into its Own 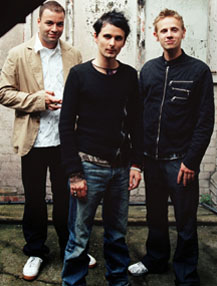 It’s doubtful there’s ever been a piece written about the band called Muse that hasn’t compared it to British forebear Radiohead.

That may be exaggeration, but not by much. Even before the trio from the sleepy coastal town of Teignmouth, Devon, emerged with its 1999 debut Showbiz, the litany of "Radiohead clone" putdowns started stacking up. Only the missing-in-action Remy Zero has garnered such scoffing, though that outfit has been spared constant haranguing.

"To be honest, I think it’s something that’s spreading around the press a bit," affable Muse frontman Matthew Bellamy responded, speaking like a speed-chugging Hugh Grant. "It’s just been passed down like some kind of Chinese whisper from some review in the (British music publication) NME from about seven years ago. I don’t think anyone at our gigs or who has bought our albums would think that."

That’s debatable. I have a fairly obvious theory that a hefty part of why Muse has caught on in a big way stateside – especially this year, bolstered by its third and most popular album, Absolution, and the sinisterly romantic single "Time Is Running Out" – is because it satisfies a craving from old-school Radiohead fans who have grown disenchanted with that band as it has gotten sonically weirder.

It isn’t just that Muse keeps the spirit of "The Bends" and "OK Computer" alive with grand epics of its own, matching its attraction to the apocalyptic while adding traces of Queen-y bombast, industrial synth sheen and classical flourishes – the piece "Butterflies & Hurricanes," for instance, opens with an homage to Rachmaninoff.

More so, it’s that Bellamy’s soaring, high-pitched, prone-to-dramatics voice, though perhaps equally influenced by the late Jeff Buckley’s, is a dead ringer for Thom Yorke’s.

"I’ve always found it very difficult to see the comparison myself," Bellamy remarked good-naturedly. "Maybe in the early days it made sense, because we chose to work with John Leckie, and he produced (Radiohead’s) early albums. And maybe vocally – that kind of emotional thing we both have or whatever. But that’s about as far as it goes with me. Musically, and in terms of what we stand for, we couldn’t be further apart."

He was quick to add, however, that "I really don’t mind it. For years, people have said all sorts of things ... and it hasn’t really had any effect on me or what we do. In the beginning, whether they were insults or compliments, I was generally impressed that we were being talked about at all."

All Bellamy and his mates – bassist Chris Wolstenhome and drummer Dominic Howard – ever wanted was to find a way out of Teignmouth, "a pretty depressing place to be. We got into a band because we needed to invent some nightlife for ourselves. Coming from a small town, you grow up dreaming of wanting to escape. But we never could have predicted (this) would take us this far."

Fast-forward to now, and more people are talking about Muse than ever before – and taking the trio seriously. The reason: the band’s quite galvanizing live show.

Whether its over-the-top albums ever get respect from critics hardly matters now. Through repeat visits and a few high-profile appearances, Muse has spawned a growing cult of fans who regularly sell out its steadily upsized gigs.

At home and across Europe, where fans have watched the three mates essentially grow up in public (they’re all in their mid-20s now), such success has been the case for a while.

"I’m not sure if it’s because of the Internet or whatever other grass-roots thing it might be, but somehow we’ve become a bigger live band than anything else," Bellamy noted. "Look at England, for example: We’re doing two gigs at Earl’s Court at the end of the year, when the kinds of acts that normally play there are U2 or Madonna. It feels strange to be the band who’s sold the least records in the world to ever play there."

Muse’s discs do sell, and quite handsomely for a band that’s only beginning to get airplay. "But it really seems like the more we tour, the more we play, the more people get to know us. We’ve never really broken wide on mainstream television or radio. It’s always been by playing live."

"And that really started to build here after ..."

"Coachella," Bellamy finished. I was thinking of the group’s impressive midday set at KROQ’s last Inland Invasion bash, where I first noticed how rabid its devotees can get. But in retrospect, he’s right: Muse’s inclusion at Coachella was a crucial turning point that lent the band a hip legitimacy it hadn’t established on its own here.

Not that Bellamy remembers much about it.

"It was so unbearably hot that it was difficult to concentrate, actually. I think we played reasonably OK under the conditions, you know, but it was so bloody stifling it’s now like a weird, hazy dream to me, and I don’t really understand what went on."

What matters isn’t how good or bad Muse was that day. What matters is that the band held on long enough for such timing to smile upon it.

As little as five years ago, there was no room for Muse within so-called alternative radio’s narrow aesthetic. "When our first album came out," Bellamy recalls, "it was standing up against things like Korn and Limp Bizkit. Everything was dominated by hard-rock and new-metal."

But the musical climate has changed recently, thanks to the widespread popularization of indie-rock and outlets that play it. "A few more truly alternative bands have broken through," Bellamy says, "like the Strokes and the Flaming Lips and Coldplay. I think that has opened up the gates for us."

That may brand Muse a temporarily hot also-ran, or this could be the start of a small phenom. So what comes next? How does Muse capitalize on this newfound niche?

Bellamy isn’t sure, nor does he have concrete ideas about the next Muse album.

"Traveling to America has rubbed off on me in some ways. There’s a sound – I think you call it Tex-Mex?" asked the fan of flamenco guitar. "Maybe a harder, more electro version of that might creep out. Or a bit of minimalism – something not quite so grand and epic, more scaled-back."

And definitely more emphasis on sturdy drum-and-bass grooves, like the one that propels "Time Is Running Out." Groups like the Jimi Hendrix Experience and Rage Against the Machine and Led Zeppelin – "they relied on that, then put more lead stuff on top of it, instead of always thickening things with power chords."

That should give Bellamy more room to explore his deepest, darkest emotions, the driving force behind all of Muse’s music. "I just don’t have any other way of expressing that. It’s not deliberate," and it’s not some blatant attempt to be Radiohead, either.

"It’s just what naturally comes out. It’s my personal journey toward something larger than the everyday."