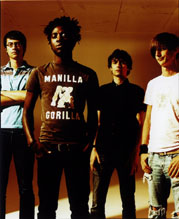 Gang of Four. New Order. Joy Division. The second coming of Franz Ferdinand. The Smiths meet Sonic Youth. These are just some of the endless parallels that are drawn between Bloc Party and its musical predecessors.

Even if some of the comparisons are apt, the London based four-piece band is defined by something entirely different. When asked about its musical influences, the band is either overtly vague or pointedly discreet.

Perhaps this is because the edgy dance rock and glitchy, atmospheric electronica that it’s become associated with is not eminently traceable to a definitive root or inception point, but instead frees itself from these shackles by treating the past as a scrapbook and creating new forms from the ashes of music history.

No mean task for a band that’s still a new kid on the block, but undoubtedly one of the reasons for its overnight stardom. Bloc Party achieved an almost instant celebrity status with its first album Silent Alarm. The band was praised for its fresh approach to energetic punk funk and the alluring sonic bustle coursing throughout its album. But it wasn’t until February of this year that Bloc Party emerged as something more than the next best thing amongst scores of post-punk and new wave hopefuls. Its latest album, A Weekend in the City, finds the band more mature both musically and thematically.

“We don’t like to be compartmentalized,” says drummer Matt Tong. “So on this album we were going for something more massive and diverse.”

To be sure, the angular, taut guitars and hyper-kinetic drumbeats are still present, but the band has expanded its scope and range by supplementing its danceable intensity with an orchestral, cinematic texture, replete with electronic sounds and synthesizers.

This is no longer just party music for party people. Lyrically, lead singer and songwriter Kele Okereke has grown tremendously by focusing his themes and understanding his capacity to be both incisive and poignant. While Silent Alarm was angst-ridden and urgent but ultimately distracted, A Weekend in the City grounds itself by examining the malaise of contemporary urban life through the lens of personal narrative.

“Kele really wanted to create a direct dialogue with the listener this time around,” explains Tong. “He had more confidence in his songwriting, and I think he was tired of writing material that was thematically vague.”

As a result, the album takes a critical look at the personal lives of young Londoners and examines the numbness associated with the hedonistic, drug-infused culture of modern life. The noises of the city creep into the band’s sound as well, which allows the city to come alive by giving voice to its faceless clamor.

This sort of bricolage, combined with its growing incorporation of electronic sound is what makes this band so much more compelling than many of its peers. Part of this newfound expression should be attributed to its producer Garrett “Jacknife” Lee (U2, Snow Patrol) who helped Bloc Party to redefine its sound in a way that was neither trite nor over-the-top.

“We tried a number of producers before but it wasn’t until Jacknife Lee that anything really clicked. We liked his enthusiasm and his experience with dance and electronica,” says Tong.

Lee introduced the band to an eclectic set of sounds and a wide variety of music that would inform its stylistic choices on A Weekend in the City. Lee’s influence wasn’t confined solely to its musical choices.

“He kept us from throwing chairs at each other. I think the best producer acts as a referee, and he helped us keep balanced by doing just that.”

This sense of balance clearly pervades the record.

A Weekend in the City has received high acclaim, and for good reason. It’s more complex, progressive and emotive than the debut and finds the band exploring new and exciting territory. Nonetheless, despite the accolades and praise, Bloc Party remains as modest as ever.

“We’re definitely lucky to be playing music in this moment, and we’re really pleased that people are embracing our material. We might not have been able to play this kind of music five or 10 years ago.”

A Weekend in the City is currently available. The band will perform Oct. 6 at the Detour Music Festival in downtown. For more information, visit www.blocparty.com.